The Irish Times view on a no-deal Brexit: bracing for impact 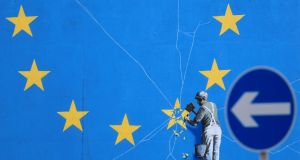 A view of the Brexit-inspired mural by artist Banksy in Dover, England, ahead of the debate and vote on the Brexit motion at the House of Commons on Tuesday. Photograph: Gareth Fuller/PA Wire

The dangers from a no-deal Brexit are starting to come more clearly into view. The problems and questions it would create in relation to the Irish Border were widely discussed in the last week. Now we are beginning to get a better view of the official estimates of the impact on the economy.

Predictably, they show a significant hit to economic growth, fewer jobs and a deterioration of the public finances. Both the Central Bank and the Department of Finance foresee a cumulative hit of around 4 percentage points to economic growth this year and next, though both concede that forecasting this with any confidence is hugely difficult. Indeed, one of the real challenges in responding to a no-deal Brexit will be its unpredictability.

How bad would delays at ports and airports be? What would be the impact on businesses here?

Minister for Finance Paschal Donohoe said on Tuesday he intended to stick to his spending and tax plans for this year, even in the event of there being no deal, but that plans for future years may need to be revised. In the worst-case scenario this would certainly be the case. The Government would quickly face choices on its spending and tax priorities. The current national debate on where to spend the fruits of the economic boom would reverse.

The economic impact on Ireland would come in a number of ways. Exports to the UK would be hit and import prices would rise, particularly in areas like food. Consumer and business confidence would be affected. There would be a knock-on here from slower growth in the UK. One of the real difficulties is estimating what would happen in the months immediately after a no-deal Brexit. How bad would delays at ports and airports be? What would be the impact on businesses here? Is there a risk that normal trade in some sectors effectively stops for a period?

There is no doubt that rural Ireland is most exposed. Its reliance on food and agriculture and on smaller manufacturing firms, and the lack in many areas of a large presence of businesses in other sectors, leaves the regions most exposed. This, in turn, provides a real challenge for policymakers.

Of course a no-deal outcome may be avoided. The extraordinary events in UK politics in the last few days show a desire to avoid a no-deal combined with a continued inability to agree on a feasible way forward. Just demanding that the current backstop be replaced by an “alternative” as the House of Commons did on Tuesday – after 18 months of negotiations failed to find one – is deeply worrying.

5 No, you can’t use the bathroom, Jared and Ivanka tell their Secret Service agents