Joanne O’Riordan: Breathtaking what you can do when you know all the facts 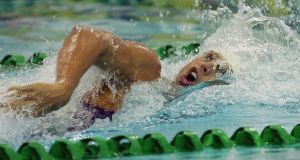 During sports like swimming you can quite easily get into an induced panic stage just from your breath. Photograph: Robert Cianflone/Getty Images

Up until Friday of last week, I was incredibly confident that I could breathe and breathe well at that. I had some issues when wearing my masks to games with my glasses fogging up on occasion. And then watching games, especially the first few post-lockdown, it struck me how many players were puffing their cheeks and breathing heavily.

So, while Covid-19 wreaks havoc on our lungs – and as players are looking for that extra edge – I turned to a man whose job it is to help athletes and regular civilians breathe better and breathe easier.

Eoin Burns of breathingcoach.ie from Fenit is a Tralee-based OxygenAdvantage trainer and Buteyko practitioner. Specialising in asthma, anxiety, allergies and sleep issues along with sports performance and mental health, his role is to clear the air on breathing misconceptions.

“People don’t really identify their breath as something that’s an issue unless it affects them, for example, during sports like swimming you can quite easily get into an induced panic stage just from your breath. Your body goes into fight or flight mode without you even realising it. Your breath is a key component actually in staying calm,” explains Burns during our chat.

Breathing is an apparently easy thing to do. For any mere mortal, it’s a tell-tale sign you’re alive. It’s only when your breathing is disrupted due to illness or any ailment, you begin to realise how tricky it is.

“In relation to sports if you’re an asthmatic you’re probably working up to three times harder than everybody else just to stand still. And, you know, that’s not really apparent on the outside but just for somebody who is asthmatic. They can be described as a sort of flaky player because they’re hit and miss. They’re good one day, and then they’re crap the next day, and sure they’re lazy, um. There are all these adjectives used then to describe players who are actually struggling to breathe. So if you’re struggling to breathe, then you’re struggling with everything else.”

Burns tells me on the pitch the one player opponents should look out for is the one on his knees or breathing hard. The player is obviously worn out from the game, but stress breathing and trying to keep cool and calm isn’t an ideal thing for players during matches.

Is this maybe when you see someone effectively trying too hard and fumbling the mere basics, kicking that super simple free wide? “Absolutely they’re stress breathing, and they’re breathing more. There’s a lack of understanding that breathing more actually increases oxygen levels. That’s completely false. Less oxygen actually gets into your system, and when you breathe more, you lose control. If you are breathing more, you actually get out of breath, and you get out of sync with your breathing, and you have to stop and have to recover, or else you get into this panic stage quite often,” Burns explains.

“Try to calm your breathing, calm your heart-rate, go slower, breathing down, relax and rest rather than be stressed and get anxious. You’re trying to engage the parasympathetic system as well as the sympathetic system. So that heavy breathing is a stressful thing, and your brain and whole body gets stressed too.

“When you’re playing sports, you’re just trying to rest and recover as quickly and as efficiently as possible. So the ball is in play for just over half of a match, maybe a little bit less. You actually have quite a lot of time to recover there. Quite a lot of people think, you know, I should keep my heart rate up and keep up my current level of output even though I’m getting a rest. Whereas I believe you’re better off actually to get a rest in.”

Heart rate is another thing we briefly touch upon. The idea is to keep your heart rate as low and stable as possible. Obviously, other factors are at play, but changing your breathing style can help during games and in everyday life. “So for the player that is the lazy player who’s trying to put his hands on his knees or his hands behind the head, his heart rate may be too high, at rest. So, for example, you might have a resting heart rate of 90.

“It can be tough and also if you have a very blocked nose, it’s really hard to start to breathe through your nose. There are nose unblocking exercises, but you have to trust your body to trust that you’re going to breathe and it’ll be enough because you are used to breathing two or three times too much the wrong way.

“You will take in enough through your nose, but because you’re so used to over-breathing, you return back to being a habitual mouth-breather. You’re trying to learn to adapt the nose to it. So, at the start, you’re fighting with your body to make these changes or adaptation, and then your body starts to get used to it and learn that it can trust you”.

Burns takes me through the simple box breathing, a breathing pattern everyone is familiar with. Breathe in for four, hold for four and exhale for four, in a repetitive cycle. The idea behind this is to slow the body down, put it in a calm and relaxed state, but being conscious about your exhale.

“We tend to sort of think about breathing only on inhale, and we’re just blowing off whatever exhale we have there. If you blow off too much, then when you breathe in, you’ve got to breathe in more, and that’s where your disruption comes. Whereas if you’re regulated by having your mouth closed, and you’re breathing more heavily you can’t breathe too much through your nose, but you’re much more aware of it, so you actually start to hear your breathing.”

The general consensus from our conversation is how breathing has a severe impact on our day-to-day life, from sleeping to everyday performance, both on and off the pitch. As Burns concludes: “Because Covid is so new people haven’t really worked that out too, and there’s more of an emphasis made about that breathing and fighting with your breath and that struggle. That’s actually embraced because it’s a lost art in lots of ways.”

1 Golf in Level 5 Covid restrictions: Clubs still waiting to hear if they can remain open
2 Hugo Keenan could start in changed Ireland team against Italy
3 Marcus Rashford is Man United’s hero in the Paris rain again
4 Gerry Thornley: After 32 weeks the Six Nations is back up for grabs
5 The Offload: Spectre of doping hangs heavy over South African rugby
Real news has value SUBSCRIBE
Here is your handy guide to sport on television this week