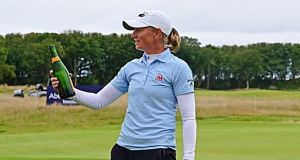 Stacey Lewis of the USA celebrates with champagne at the 18th green. Photograph: Mark Runnacles/Getty

Leona Maguire was the epitome of consistency as she sure-footedly negotiated The Renaissance links in North Berwick with a final round 70 for a total of 285 that gave her a top-20 finish in the Aberdeen Standard Investments Scottish Open, a finish which resulted in double benefits in jumping her to 39th on the updated LPGA Tour order of merit and to 15th on the Ladies European Tour equivalent.

As two-time Major champion Stacy Lewis of the United States lifted the title with a birdie at the first hole of a four-way play-off, Maguire headed on from North Berwick to Royal Troon for the AIG British Women’s Open in upbeat mood.

“Felt so good to be back competing again. Solid top-20 to re-start the season @LadiesScottish on a tough golf course,” tweeted Maguire of her efforts, which marked her return to competitive duty for the first time since the Australian Open back in February.

Maguire’s final round saw her run off 13 straight pars before a birdie on the 14th and 16th moved her up the leaderboard, only to stumble at the 18th with a closing birdie. The 25-year-old Co Cavan golfer picked up a cheque for €16,900 for her efforts, but more importantly moves on to the British Open knowing that her game is sharp. Maguire will be joined by Stephanie Meadow in the field at Troon.

For Lewis, the victory marked her 13th career title worldwide and first success since 2017. It was also her first victory since she became a mother. The American finished tied with four other players – compatriot Cheyenne Knight, overnight leader Azahara Munoz and Denmark’s Emily Kristine – on five-under-par 279 after a closing round 72 as she reserved the fireworks for extra-holes, where a birdie on the first hole of sudden-death proved decisive.

Lewis admitted to singing her daughter Chesnee’s favourite song throughout the day, with her very own rendition of Taylor Swift’s Shake it off proving to be one of her most important thoughts before calmly holing from 24ft for victory on the first play-off hole.

“I hit a good approach shot into 18 in regulation and the shot in the play-off was exactly 10 yards further, so it was 8-iron, same shot and fortunately I got it started more left this time and I got it on the top shelf.”

She continued: “Travis and I had been reading putts together all day and I had the line there. It was five inches outside left. I knew I needed to get it there with enough speed and finally, after the whole back nine, I got one to go in and that was all I needed.”