Tony Martin can strike on day one of festival with Acclamatio 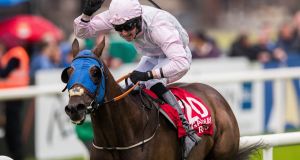 Galway produces more than its share of course specialists and Swamp Fox can join an elite group if he lands the festival’s opening day feature for a second year running.

Just three horse have pulled off back to back wins in the €100,000 Connacht Hotel Handicap, Ireland’s most coveted prize for amateur jockeys.

Weld famously rode the 1964 winner Ticonderoga as a teenager as well and the two mile contest can boast a notable list of winning jockeys over the years including Willie Mullins who won in 1985 on Pargan.

Mullins saddles three in Monday evening’s contest and his son, Patrick, will attempt to win it for the first time on board Lagostovegas. She got bumped up over a stone by the handicapper for a recent victory at Killarney.

Weld saddles both the topweight Zafayan and Finny Maguire’s mount Ezanak. It would be fitting if the legendary trainer confirmed on his old stomping ground that his string have turned the corner after a virus which has made the first half of the season more endurance test than enjoyment.

Gordon Elliott never won the race in his own amateur rider days but will hope to saddle Automated to win despite being drawn widest of all of the 20 runners.

The high class hurdler Rashaan gets his favoured right-hand circuit in this and boasts an obvious chance although he does look a more potent operator over jumps.

Swamp Fox is a proven winner at both codes and was a 16-1 winner in this race a year ago when beating Ted Veale with authority.

He confirmed that level of flat form subsequently with a fine run in the Irish Cesarewitch and comes back to Ballybrit on the back of hurdle victories at Killarney and Ballinrobe.

Swamp Fox is 11lbs higher in the ratings this time but trainer Joe Murphy is in flying form and the proven ability to deliver up the gruelling final hill is a big plus for Johnny Barry’s mount.

It’s 30 years since Tony Martin rode the big race winner and he trained back to back winners in 2014-15 with Edeymi and Quick Jack.

Martin runs The Graduate in the feature this time but it is his runner in the following flat handicap, Acclamatio, who could carry Newtown Anner Stud’s colours to day one festival success.

This one was 33-1 when winning at Killarney earlier this month but looked a convincing winner and full value for the 11lb hike given by the handicapper. He has only 8.5 on his back and Wayne Lordan is booked. Hyperdrive looks an obvious danger but Martin is always a formidable Galway opponent.

A low draw is always essential in seven furlong handicaps and Comhghairdeas has box four in his race. He usually races prominently and should appreciate a return to the trip after finding Snowstarr too good at Tipperary over five.