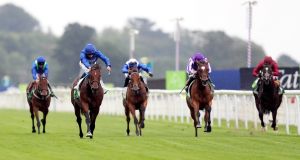 The seventh Irish Champions Weekend takes place in the grim circumstances of the coronavirus pandemic – although, from a racing point of view, it can still boast the world’s top-rated racehorse, Ghaiyyath, at Leopardstown on Saturday.

It seems a comparatively frivolous factor, however, in the context of Friday’s news about star apprentice Shane Crosse becoming the first jockey in Ireland to test positive for Covid-19.

The 18-year-old champion apprentice faces two weeks in isolation and misses out on the chance of a first Classic as he was due to ride Joseph O’Brien’s St Leger hope Galileo Chrome at Doncaster on Saturday.

He was also set to ride O’Brien’s Pretty Gorgeous, one of the favourites for Sunday’s Moyglare Stud Stakes at the Curragh.

If the widespread response has been one of dismay and concern for one of the most promising riders in the country, there has also been recognition that a jockey testing positive could hardly be a surprise all of three months after racing resumed here.

“We’ve been expecting something like that. You’d prefer not to see it and your heart would go out to the jockey in terms of the opportunity to ride in two Group Ones. But that’s just the way the world is at the moment. The protocols were prepared with that in mind,” said Horse Racing Ireland’s (HRI) chief executive, Brian Kavanagh.

Last week HRI issued Government-approved protocols that allowed jockeys travel both into and out of the country for Group One races without serving a two-week quarantine as long they provided a series of Covid-19 tests.

All of it is a stark reminder of the baleful circumstances in which this weekend’s showpiece event takes place behind closed doors.

It certainly puts into perspective factors such as a million-euro drop in prizemoney for the 16 races – six of them Group Ones – that are up for grabs between Leopardstown and the Curragh on Sunday.

Nevertheless, the fact of Ghaiyyath lining up in the Irish Champion Stakes is still an opportune fillip to an event designed to showcase the very best.

The action here still has to fight its corner for profile on a weekend when there is a glut of 10 top-flight races in all taking place around Europe.

Christophe Soumillon teams up with Serpentine, who is accompanied by stable companions Mogul and Nobel Prize in the Group One Grand Prix de Paris due off at 2.55pm Irish time.

The Prix Vermeille (3.35pm) on the same Longchamp card will see Ger Lyons’s Irish Oaks heroine Even So return to action. She is joined by Dermot Weld’s Tarnawa and the Ballydoyle runner Laburnum.

Ghaiyyath’s Champion Stakes appearance, though, will ensure Leopardstown is centre-stage on Saturday.

The Godolphin star was raised to an official rating of 130 after his three-length defeat of Magical in last month’s Juddmonte International at York.

Magical ended a seven-year run of success for overseas horses when leading home a Ballydoyle clean sweep last year and will try to become just the second back-to-back winner of the race.

Ryan Moore, however, has opted to stick with Japan, who failed to fire in the King George and prior to that was third to Ghaiyyath in the Eclipse.

With Ghaiyyath all but assured to assume his usual style of forcing the pace, it will be interesting to see the response by Ballydoyle’s three runners.

The French raider, Sottsass, is likely to try to pounce late under Colin Keane, but Godolphin’s bullish view about Ghaiyyath being a true top-notch performer at the peak of his powers is hard to dispute.

Saturday’s other Group One, the Matron, sees the old rivals Fancy Blue and Peaceful face off for a third time this season.

Both are classic winners and although Moore has picked the French Oaks winner Fancy Blue, a mile on drying ground might be more up Peaceful’s street.