Galway Races open with odds-on favourite and a local winner

Famous faces among the crowd, with more than 160,000 expected over the coming week 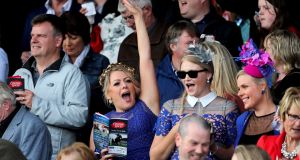 A punter celebrates a winner on day one of the races at Ballybrit. Photograph: James Crombie/INPHO

It didn’t take long for the idiosyncrasies of the Galway Races to manifest themselves. The first race of this year’s festival saw an odds-on favourite romp home, while the second saw a 20-1 shot leaving the bookmakers whooping for joy.

Trainer Shane Ryder, who has a yard of just 12 horses in Laurcetown near Ballinasloe in east Co Galway, was thrilled to win the latter with Pateen.

“It has always been a dream to win in Galway,” he said, as a few smart local punters began collecting their winnings.

The festival is expected to attract a gate attendance of more than 160,000 over the seven days, and for some the racing is a secondary matter.

Aside from socialising, there is shopping to be done and among those who have set up in Ballybrit shopping village is Kaminee Buttani, whose customers have included the Duchess of Cornwall, Camilla Parker Bowles, Sienna Miller and Brooke Shields.

Ms Buttani and her husband Mahindra run a clothing company which makes self-embroidered custom-ware. They are based in London and their clothes are manufactured in Delhi.

“I go to Punchestown as well. I used to go there for seven years but since the Irish economy went down I gave it a gap,” said Ms Buttani.

“We are hoping to do very well here in Galway. We tried to get in here for years. I have all the customers like Katie Walsh and Jessica Harrington and there is a big market in the races.”

Former England international footballer Martin Keown was enjoying his day out in Galway once again.

“I love coming here, visiting the relatives and then getting into Ballybrit to see the races,” said Mr Keown.

“I come here a lot and it’s a race meeting where you can really unwind and enjoy the atmosphere.”

Former Rose of Tralee Maria Walsh was previously a table cleaner and server in the carvery area, and she was back at Ballybrit for the first time since.

“This is my first time properly at the races, it’s been fun and that fashion out there is amazing today.”