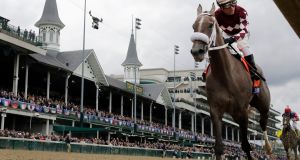 Aidan O’Brien drew a blank on Day One of the Breeders Cup where it was the Godolphin team that saved European pride with Line Of Duty’s victory in the Juvenile Turf at Churchill Downs.

Line Of Duty and Uncle Benny had minimal contact in the final strides of the race which provoked a lengthy stewards enquiry that eventually let the result stand.

“I’ve never been so tense on a racecourse. It’s a great decision by the stewards,” Line Of Duty’s relieved jockey William Buick said. “We all know it made no difference to the result.”

It was a welcome result for the European raiders after the opening two races of the 35th Breeders Cup were won in dominant front-running style by unbeaten local stars.

Bulletin in the newly instituted Juvenile Turf Sprint was too good for the Euros with O’Brien’s So Perfect best of them in third.

But it was Newspaperofrecord who put up one of the great routs in Breeders Cup history, landing the Juvenile Fillies Turf in a canter by almost seven lengths.

“What a freaky horse!” said her trainer, Chard Brown, winning the race for a fifth time.

Kevin Ryan’s East did best of the raiders in second with her jockey Jamie Spencer reporting “the ground would be described as soft in Britain and Ireland.”