Etneya win at Gowran would prove a fitting tribute to Smullen 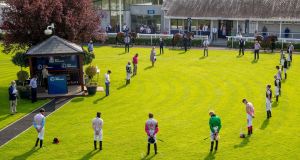 The funeral of nine-times champion jockey Pat Smullen took place in Rhode, Co Offaly, on Friday, uniting racing in grief but also appreciation of a hugely popular and respected person.

However when he did win it in 2014 on the Weld-trained Brooch, it represented a significant success for Smullen as it was the first time he reached a century of winners in a season.

With the tragedy of his loss at just 43 to the forefront of everyone’s mind, the outcome of the weekend’s most valuable race will feel trivial.

Nevertheless 13 fillies will line up with Etneya carrying the Aga Khan’s colours which Smullen carried to perhaps his greatest success on Harzand in the 2016 Epsom Derby.

The half sister to another of Smullen’s old partners, Eziyra, is the most inexperienced in the race but also the one most open to progression off an official mark of 99.

She has achieved that on the back of just two runs, winning a maiden before subsequently having a lot go wrong in the Desmond Stakes at Leopardstown.

Considering she was slowly away, and ran too free at times, Etneya ultimately did well to get within four lengths of the winner Royal Dornoch. She should step up for that experience.

The Oaks runner-up Ennistymon is an obvious threat and carries first-time blinkers. However her mark of 105 is a drop from the summer and she could be vulnerable to an improver like Weld’s runner.

Weld and the Aga Khan also have the most inexperienced runner in an earlier mile conditions event in which better ground might prove crucial to Eldama’s chances of beating Lord Rapscallion and Saltonstall.

‘Fozzy’ Stack has just the one runner at Gowran but will be also represented at Ayr in the Group Three Firth of Clyde Stakes on Saturday.

The Cork maiden winner Sloane Peterson takes her chance in a race won by Rose Of Kildare a year ago. Shane Gray rides for the Tipperary trainer.