HRI reassured about continuation of racing under Government roadmap

Racing’s ruling body will prioritise getting owners back into racecourses 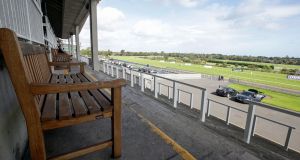 Racing’s ruling body has described as “reassuring” Government confirmation that the sport will continue up to all but lockdown level under its new Living with Covid roadmap.

Horse Racing Ireland also said on Tuesday that its priority of getting owners back on track will be possible under the current Level Two criteria that allows up to 200 spectators at outdoor sporting arenas with a 5,000 patron capacity.

However when racegoers will be able to go racing again isn’t likely to be known until later in the week after HRI has worked out practical measures required to allow people return.

Racing has been staged behind closed doors in Ireland since June 8th when it was the first major sport to resume here due to the coronavirus pandemic.

There had been speculation that crowds of up to 500 would be permitted to go racing under the new roadmap announced on Tuesday. However that figure will only apply should the public health situation improve and the country is put on a Level One standing under the new criteria.

“Two hundred patrons will be allowed in addition to those working at race meetings so that is welcome,” said HRI’s chief executive Brian Kavanagh.

“We’ve said all along that owners are our first priority. Owners pay the bills so to not allow them on-track has not felt right.”

Asked if a 200 limit would be enough to host all owners with runners on a programme, Kavanagh said: “It depends. We will work with racecourses on the specifics. But the average number of runners at a meeting is 100 or 120 tops.

“Some owners will have multiple runners , some may be absent or can’t attend so we’ll work it through. But I think it should be okay.”

The racecourses body has already said that hosting crowds of up to 500 people could end up costing them in terms of having to put in place facilities at tracks that for the last three months have been workplaces only.

“To have racecourses limited to 500 is challenging for them in the long term. Racecourses are an area of primary concern. While they have the capacity to survive one shock, once it goes into a second series that becomes problematic,” Kavanagh added.

However the HRI boss did point to the Government’s plan where it outlines how “for very large purpose built event facilities (for example: stadia, auditoriums, conference or event centres) specific guidance will be developed with the relevant sectors to take account of size and different conditions for larger events.”

Kavanagh said racecourses are large purpose built facilities and that HRI will engage with the relevant authorities to see if bigger attendances may be possible at some point in the future.

“We will obviously explore that further with regard to its applicability to race meetings. Clearly the primary driver is public safety. It is little steps and these are a couple of more steps along the way which is welcome. It’s welcome to get the clarity,” he said.

Under the Government’s five-level plan for living with the virus, racing will be able to continue through stages three and four, albeit reverting to behind-closed doors should the wider health situation deteriorate.

Only at the level five lockdown phase will racing have to stop.

“It is reassuring to know racing can continue, as it did in the Kildare area during the [recent] lockdown,” Kavanagh said.

He added that the specific layouts of different tracks means that time will be needed to work out the practical steps required to welcome back racegoers.

He said an announcement on which meeting will first host racegoers again could be made later this week.