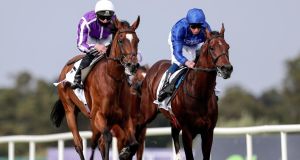 Within 40 minutes Aidan O’Brien and his son Joseph put their stamp on Saturday’s big-race action on both sides of the Irish Sea.

During a short but spectacular career as a jockey his son Joseph didn’t figure on that stellar list of nine victories.

But on Saturday he secured a rare accomplishment of his own when saddling Galileo Chrome to an emotional success in the world’s oldest classic, the St Leger at Doncaster.

Having ridden Leading Light to win the 2013 Leger, it meant O’Brien emulated the legendary Harry Wragg who rode winners in the 1930s and trained Intermezzo to win it in 1969.

However that Galileo Chrome got the better of an exciting duel with Berkshire Rocco under English jockey Tom Marquand rather than intended jockey Shane Crosse inevitably coloured the outcome.

The coronavirus pandemic has provoked far worse outcomes than missing out on the winner of a horse race.

However in a sporting sense only the hardest heart couldn’t feel for Crosse, O’Brien’s 18-year-old apprentice who tested positive for Covid-19 the day before and so missed out on the greatest result of his fledgling career.

Contact tracing after the positive test has so far produced one further positive case from another O’Brien apprentice, Mikey Sheehy, who lives with Crosse.

The Irish Horseracing Regulatory Board also reported that all tests carried out on riders and other personnel at Limerick on Friday, where Crosse had been due to ride, were negative.

Even in the glow of a first classic victory Marquand’s thoughts immediately turned to his Irish colleague.

“This is a dream come true. Obviously I genuinely feel terrible for Shane because under such circumstances I can’t imagine what heartbreak that would bring (for me.)

“He’s in a similar boat to me. That would have been a first classic (for him) and now I know how much that means to me. It’s terrible for him but my God how the racing game is a leveller,” he said.

Joseph O’Brien watched the race at home and explained: “Shane obviously had been in the yard during the week so just as a precaution any of his close contacts are in the process of being tested and I just haven’t gone racing to err on the side of caution really.”

He added: “I do feel for Shane Crosse. He’s a very talented rider and he’ll have a lot of big days going forward.”

Aidan O’Brien’s Santiago started 5-2 favourite for the Leger but could finish only fourth although his stable companion Wichita had earlier got the better of a tight finish in the Park Stakes at Doncaster.

However the Ballydoyle trainer got the perfect Group One outcome in the Irish Champion Stakes as Magical emerged best from a prolonged head-to-head with the world’s top-rated horse.

With Ryan Moore on Japan, Seamus Heffernan took the mount on Magical who stuck rigidly to Ghaiyyath’s flank as he employed his usual front-running tactics.

They had worked to the tune of three lengths in last month’s Juddmonte International but the Irish mare reversed that in style this time.

The pair eyeballed each other for much of the straight and the 9-2 winner had three parts of a length in hand of the 8-13 favourite at the line.

Magical’s 66-1 stable companion Armory was third a short-head in front of the French raider Sottsass.

Magical joins a former O’Brien star, Dylan Thomas, as the only two double winners of the prestigious contest.

“We were delighted Ghaiyyath was coming because we were going to get another go at him. We just felt York didn’t work 100 per cent for us and today she eyeballed him all the way, so we’re delighted,” O’Brien said.

“We were very happy to make the running today and if Ghaiyyath wanted to take a lead we’d be happy and if he made the running we were going to go with him.

“It was always going to be a solid even match all the way and whoever was behind could have come along and come and got us. But we just took the chance that we’d let her and him match up, go stride for stride and see,” he added.

Magical could join her younger stable companion Love in next month’s Prix de l’Arc de Triomphe and has been cut to 8-1 to make it third time lucky in the Longchamp highlight.

If the Champion Stakes was fought out between racing’s superpower operations then the Coolmore Matron Stakes produced a fairytale outcome as Champers Elysees carried her rapid progression to the highest level.

The former champion jockey won the Matron three times as a rider but the 50 year old was keen to park his stellar riding career to the side.

“I’m sick of everyone saying ‘you had such a great career as a jockey’, that’s in the past and it’s the now I’m worried about,” he said.

“It’s been a brilliant year but to win a Group One on Champions Weekend means everything. That’s why we get up in the morning for.

“We believe we have the team to compete in Group Ones and we want to be on this stage.

“I have to say thanks to my wife, my family, as they have been very supportive and to all the staff back at the stables and everybody who supports us, including the owners, through a tricky year.

“She was always a good filly and I did think she’d make up into a stakes filly. The amount she has improved is unbelievable.

“She has improved a lot physically and she’s now started to know she’s good. Handicap, listed, Group 3 and now she’s a Group One winner. When those fillies start improving there is no end to them,” he added.

Champers Elysees, a €28,000 yearling purchase, is owned by the 10-strong Fitzwilliam Racing syndicate and earlier this season had twice been sold to race in the USA only to fail the vet.

Such misfortune has rarely worked out so magnificently and Champers Elysees could yet make it to America for November’s Breeders Cup at Keeneland.

“The Breeders’ Cup is an option and a mile around there would suit her down to the ground as she’s quick and has a great turn of foot.

A frustrating day for Ryan Moore had some consolation as the Irish Derby runner up Tiger Moth won a Group Three at odds of 5-6 for Ballydoyle’s No 1 rider.

O’Brien said afterwards Tiger Moth “could be a really good horse” and didn’t rule out a tilt at the Melbourne Cup in November.

Cadillac joined Battleground and Master Of The Seas at the top of next year’s 2,000 Guineas betting with a smooth success in the Champions Juvenile Stakes.

Despite holding a Dewhurst entry Cadillac’s next start is likely to be at the Breeders Cup in the Juvenile Turf.

1 Gordon D’Arcy: Saracens showed again they have the template of how to beat Leinster
2 Born to ride, born to win: Sam Bennett, the making of a green machine
3 What next for green jersey hero Sam Bennett after toughest of Tours?
4 Suarez’ Italian language exam rigged according to prosecutors
5 West Ham boss David Moyes tests positive for coronavirus ahead of Hull game
Real news has value SUBSCRIBE