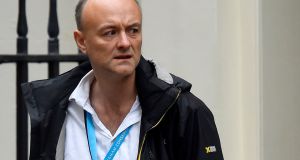 Boris Johnson’s special adviser Dominic Cummings leaves 10 Downing Street. The length, lexicon and attitude of the writing indicates the memo could only ever have come from him. Photograph: Peter Summers/Getty Images

Empathy is a generally an underrated quality and especially so in the world of political strategy. People who enjoy gaming negotiations like to think in terms of ruthless self-interest. But when you lack empathy, that self-interest becomes harder to satisfy. Unless you understand your negotiating partner, you’ll find it harder to get what you want from them.

That foundational mistake is written into every sentence of a crucial memo from No 10 special adviser Dominic Cummings and sent to the Spectator magazine on Monday night. We don’t know it’s him of course. It was sent by “a contact in No 10”. But the length, lexicon and attitude of the writing indicates it could only ever have come from him.

The whole cultural approach of anonymising the briefing is starting to become a real problem, allowing the British government to distance itself from aggressive commentary and providing a semblance of plausibility to otherwise quite deranged commentary. The memo was from Cummings and we should say so.

Cummings’s lengthy missive is angrier than the type of material put out by Theresa May’s administration, but in one central area it is uncannily alike: It shows almost no understanding whatsoever of European incentives, political systems or domestic sensitivities. It is what happens when you base your negotiating posture without any empathy or interest in the other side. It’s really not much more sophisticated than playing Battleships.

It starts with Leo Varadkar, who is increasingly turning into the chief villain of the piece among the hysterics on the Tory benches. The emotional origin of this newfound hatred comes from the fact that they are not used to Ireland having the upper hand against Britain. It goes against their sense of the natural order.

“Varadkar doesn’t want to negotiate,” Cummings insists. “He wants to gamble on a second referendum.” This is pretty much the standard Brexit narrative now. The Taoiseach has strategised against Downing Street to win domestic support and is now unable to move because of his own unnecessary red lines. There is almost no recognition of the reason he has reached his position, which is that customs checks would create a poisonous combination of economic deterioration, political volatility and security targets.

The ignorance extends to the EU’s position and the practical realities of what no-deal entails. “As things stand,” the memo goes on, “at the end of this week they may say ‘OK, let’s do a Northern Ireland only backstop with a time limit’.”

It is quite extraordinary that Cummings believes the EU will offer this. He would not need to research very extensively to discover that it will not. It has stated it over and over again. And yet the hope still lies there, undisturbed by the most basic understanding of his negotiating partner’s repeated statements.

“They think now that if there is another delay we will keep coming back with new proposals,” Cummings goes on. “This won’t happen. We’ll either leave with no deal on 31 October or there will be an election and then we will leave with no deal.”

He has failed to understand that no-deal is not the end of negotiations. It is merely the transfer of negotiations into a context in which the UK has sabotaged its own standing.

The EU is Britain’s main trading partner. After four decades of close regulatory and customs cooperation, it has developed extensive links with the continent, which are key to several of its industries, including manufacturing and agriculture. It is simply not going to be able to live without striking a deal with it. It’s hard to think of any nation on earth, apart from North Korea, which does not have trade arrangements with its neighbours.

No-deal simply transfers the negotiations to a scenario in which the UK is facing sudden trading and economic chaos. It will go back for a deal, but in a weaker position than it enjoys at the moment.

As the Institute for Fiscal Studies (IFS) said on Tuesday, no-deal would mean zero economic growth for two years, even in otherwise benign economic circumstances, leaving the UK economy 2.5 per cent smaller than under a base case scenario. National debt would be pushed to levels not seen since the 1960s. British businesses would face £15 billion of costs in red tape alone.

These are not optimal conditions for an effective negotiating posture. But the echo chamber of Brexiter dialogue at the top of government has led them to perceive it as some sort of leverage for their position rather than that of their partner. It is like a man trying to play chess with the sea.

Cummings then dissolves into an astonishing piece of tactical imagination which betrays the full extent of his ignorance of EU structures, the incentives of its member states and the most rudimentary aspects of international cooperation.

When No 10 is forced into requesting an extension of Article 50, as mandated by the Benn Act last month, he intends to operate some kind of Trumpian threat mechanism. “Countries which oppose delay will go the front of the queue for future cooperation,” he said. “Those who support delay will go to the bottom of the queue. Supporting delay will be seen by this government as hostile interference in domestic politics.”

It is a quite staggeringly demented thing to have written. It is not really clear what kind of threats Cummings imagines he can use. On trade, the EU is a bloc. There is no way for him to distinguish treatment.

Having failed that, he may try security cooperation. It’s worth taking a moment to reflect, on a moral level, on what that would entail. If Britain received a warning of a terror attack in France, say, this argument suggests that it would not pass it on to authorities in Paris. It is unthinkable. But then it is unthinkable that someone at the height of government would even voice such a possibility.

Even if one gets over the moral implications, it is a self-defeating strategy. Security cooperation does not go one way. It is two-way. Removing cooperation with a country means that information about potential attacks on the UK would similarly not be passed on.

These logical defects do not just reflect a misunderstanding of each individual issue. They are a pattern of errors, suited to the nationalist world view, which sees international relations as a zero-sum game in which big countries are winners and small ones losers to be gobbled up.

It is the strategic equivalent of Donald Trump’s views on global trade. The American president does not comprehend that when two countries trade they both win – one gets money and the other products. He simply sees one number being higher than another number and concludes that the country with the lower number is losing.

Cummings is making the same mistake on organisational cooperation. That’s partly why he and his allies have been so startled by Ireland’s prominence during negotiations. Their entire working assumption about world politics was that international cooperation sucked power from the nation state. They had never considered that it might bolster it – that two sides win.

It’s a pitiful state of affairs, on a moral and intellectual level. But most importantly for Britain, it is also pitiful on a strategic level.

Cummings’s ignorance of the motivations and systems of his negotiating partners means he is making threats composed of his own weaknesses and angering foreign leaders on the basis of leverage which does not exist. It is one thing to be aggressive and bloody-minded. But it is quite another to be so while unable to deliver on it. That is now the precarious and embarrassing position in which Downing Street has found itself.

1 Restarting Ireland: When and how will we ‘get back to normal’?
2 Coronavirus: HSE says 20% of protective equipment delivery unsuitable, testing to double
3 Man shot dead in Belfast was suspect in Keane Mulready-Woods murder
4 Covid-19 testing: Irish pharma firms source raw material to make reagent
5 Mary Lou McDonald: This crisis shows that Sinn Féin was right
Real news has value SUBSCRIBE