Few at Westminster expect deal to emerge in time 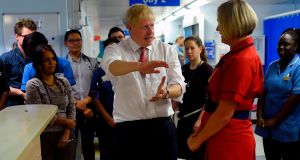 Outside parliament on Monday, on Westminster Bridge, Whitehall and in St James’s Park, Extinction Rebellion protesters were a model of cheerful industry as they pitched tents, beat drums and handed out leaflets explaining why they were there.

Inside the Palace of Westminster the mood was one of ill-tempered lassitude as MPs prepare to go home on Tuesday evening for a short prorogation ahead of next Monday’s queen’s speech.

Brexit minister James Duddridge was at the dispatch box responding to an urgent question from Labour’s Keir Starmer about when the government would publish the full legal text of its proposal to replace the Northern Ireland backstop. He said the text would be published when the time was right, and became increasingly flippant as time went on, dismissing some opposition backbenchers’ questions with a sharp put-down.

“I wonder how he can be so deeply unpleasant to so many colleagues on the opposition benches,” Labour’s Barry Sheerman protested. “The fact is that today he has said that it is not loyal or legitimate to stand up for our constituents when we are asking questions about what is contained in the deal. Some of us would vote for a good deal if we could see it, if we did not live in a secret society and a secret state.”

With both sides in the Brexit talks agreeing on next Friday as the unofficial deadline for reaching agreement, few at Westminster are expecting that any deal will emerge in time for next week’s EU summit. Boris Johnson called off a planned tour of EU capitals this week to drum up support for his proposal, and the prospect of a meeting with Taoiseach Leo Varadkar in the next few days is receding.

Johnson has signalled his willingness to modify his proposal to give the Stormont institutions a veto on the alignment of goods regulations across the island of Ireland. However, he is unwilling to move on customs, where the EU rejects his proposal for a lightly monitored customs border between North and South as a threat to the European single market as well as to the peace process.

With no deal likely in Brussels next week, attention in Downing Street is turning to how the prime minister will fulfil his promise to a Scottish court to obey the Benn Act, which requires him to request a three-month delay to Brexit if he fails to secure a deal by October 19th.

Mr Johnson’s spokesman repeated on Monday that Mr Johnson would obey the law but would take Britain out of the EU on October 31st. “The manner in which this policy is lawfully achieved is a matter for the government,” he added.