Dose of market discipline may be needed to break deadlock, says leading economist 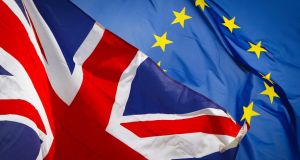 ‘The tool that the EU always uses is market discipline,’ according to chief economist at New York-based PineBridge Investments Markus Schomer.

The market crash following a disruptive no-deal Brexit will be so severe that the UK may be forced to raise a white flag within days, a senior market analyst has predicted.

Markus Schomer, chief economist at New York-based PineBridge Investments, said that if the UK crashes out of the EU on October 31st UK government borrowing costs will surge, sterling will nosedive and the country’s banking stocks will tumble.

This will force the government to take immediate corrective action, potentially rolling back or compromising on its Brexit plans, he said.

Mr Schomer said a sharp dose of “market discipline” may be what is needed to break the current Brexit impasse. He was in Dublin recently as a part of PineBridge client event.

He said Italy’s government was forced recently to back down on budget proposals in the face of a jump in its borrowing costs.

“The tool that the EU always uses is market discipline,” said Mr Schomer, in other words let the bond vigilantes loose.

“The way this works for populists is, you have to either be manoeuvred, or perhaps what Boris Johnson is doing, manoeuvre yourself into a situation where someone is holding a gun to your head, in this case the market,” he said.

He dismissed suggestions that there would be weeks or even months of market turmoil in the wake of a hard Brexit.

It is conceivable that within three days of the market crashing the UK and Brussels will hold talks and broker some sort of compromise, he said.

Mr Johnson could justify the move on the grounds that he was preventing another “2008-style recession” and that he had delivered Brexit, said Mr Schomer.

PineBridge’s Irish business traces its roots back to 1989 when AIG Fund Management Ltd was established. Asia-based Pacific Century Group bought PineBridge Investments from US insurance giant AIG in 2010 for $277 million.

He said there was nothing in the euro zone economy that warranted such action, particularly with unemployment at record lows in several countries.

Frankfurt was too trigger happy and was using extremely unconventional monetary policy tools – negative rates and QE – to ward off a temporary dip in growth, he said.

“The longer you are in this world of low-interest rates the harder it is to get out of it and the greater the pressure to stay in it,” said Mr Schomer. He also suggested that while Europe and the US had better growth fundamentals, both regions could be entering a Japanese-like period of perennially low-interest rates and weak inflation.

1 Wifi problems? Quick tips to get your home internet out of the slow lane
2 Two men face fraud charges over £1.2bn sale of Nama’s NI loans
3 Bank of England mulls cutting interest rates below zero
4 Project Eagle: What was it and why is it in the news?
5 Is it possible to get fit while sitting on your sofa?
6 Quintain to seek permission for 1,000 homes at Cherrywood
7 TikTok to invest $500m in data centre and create ‘hundreds of jobs’
8 Sony Alpha 7S III: An ambitious camera that packs in the tech
9 Restaurant bears, WFH love and Microsoft’s acquisition history
10 Deliveroo boosts restaurant numbers as virus forces diversification
Real news has value SUBSCRIBE