Johnson calls on EU to engage with ‘very generous’ offer 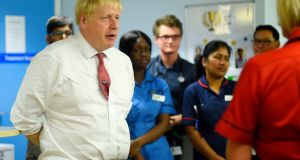 British prime minister Boris Johnson: ‘What we are saying to our friends is, this is a very generous, fair and reasonable offer that we have made.’ Photograph: PA Wire

Britain has called on the European Union to show greater engagement with Boris Johnson’s proposal for replacing the backstop as hopes fade that a deal will be agreed before next week’s summit in Brussels.

During a visit to a hospital on Monday, Mr Johnson said Britain had already made a significant compromise by agreeing that Northern Ireland should remain in regulatory alignment with the EU for goods, including agrifood.

“What we are saying to our friends is, this is a very generous, fair and reasonable offer that we have made. What we would like to hear from you now is what your thoughts are. And if you have issues with any of the proposals that we’ve come up with, then let’s get into the detail and discuss them,” he said.

The prime minister’s official spokesman said there were no current plans for Mr Johnson to meet other EU leaders in the coming days. Taoiseach Leo Varadkar suggested at the weekend a possible meeting with the prime minister but none has been scheduled.

British and EU negotiating teams met in Brussels on Monday and they will meet again on Tuesday, but there is no sign of a breakthrough.

“We are ready to have discussions at pace. For that to happen, the EU needs to engage fully with the proposals we have put forward,” said the prime minister’s official spokesman. The prime minister believes that we have set out a fair and sensible compromise, and we are now looking to the EU to match the compromises that the UK has made.”

A Scottish court on Monday declined to issue an order compelling Mr Johnson to request a three-month extension of the article 50 deadline if he has not secured a withdrawal deal by October 19th. Lord Pentland, sitting in the court of session in Edinburgh, said he would have to take at face value a pledge made by the government in court last week that Mr Johnson would write the letter seeking an extension required by the Benn Act.

What did the judge say?

“I approach matters on the basis that it would be destructive of one of the core principles of constitutional propriety and of the mutual trust that is the bedrock of the relationship between the court and the crown for the prime minister or the government to renege on what they have assured the court that the prime minister intends to do,” said the judge.

“I am not satisfied that the petitioners have made out their case based on reasonable apprehension of breach of statutory duty on the part of the prime minister.”

Parliament will be prorogued on Tuesday night until next Monday, when Mr Johnson’s government’s legislative programme will be announced in a Queen’s Speech. Opposition parties failed to agree on any action this week to strengthen the Benn Act’s defence against a no-deal Brexit on October 31st.

Liberal Democrat leader Jo Swinson said the priority was to ensure that the Benn Act is properly enforced.

“What’s unclear is, politically, whether the prime minister thinks there is some merit in being seen to disobey the law. Of course, on a cross-party basis, we will continue to meet to make sure we enforce that law,” she said.