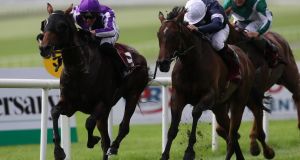 Delphi initiated a big-race double for Aidan O’Brien and Seamie Heffernan when making it four from four for the season with a determined display in the Comer Group International Irish St Leger Trial at the Curragh.

Down the field on his only juvenile start at Tipperary, the Galileo colt made a winning return in first-time blinkers at the Curragh in June and has not looked back — following up in a Navan handicap before dominating from the front in the Nijinsky Stakes at Leopardstown.

With last year’s Irish St Leger heroine Search For A Song a significant non-runner, Delphi was the 10-11 favourite for this Group Three assignment and was once again sent straight to the lead by Seamie Heffernan.

Odds-on backers would have been sweating at the sight of Master Of Reality lunging late, but the line came just in time for Delphi, with just a short head separating the pair where it mattered.

Heffernan said: “You probably wouldn’t pick him out in the ring or looking at him at the start, but he doesn’t know when he’s beaten.

“Very few horses will give you 100 per cent, but he feels like he’s giving you that. You don’t have to be the best if you give the most, and he’s one of the most genuine that I will ever ride.

“He’s gone from a mile to a mile and six, and he might just have a bit of class.”

Betfair make Delphi a 16-1 shot for the St Leger at Doncaster in September.

O’Brien and Heffernan were soon on the mark again as Armory finished with a rattle to emerge triumphant in the Irish Field Celebrating 150 Years Royal Whip Stakes.

Fourth in the Irish 2,000 Guineas and the Tattersalls Gold Cup on his last couple of starts, Armory was the 13-8 market leader to make the most of having his sights lowered to Group Three level.

Heffernan’s mount looked to have nowhere to go racing inside the final furlong, but once the gap came, he displayed a sizzling change of gear to get up and beat Numerian in the dying strides.

Heffernan added: “I was doing more pulling than pushing for most of the race!

“He got me out of trouble and he was the best horse in the race.”