Apprentice jockey tests positive for Covid-19 in the UK 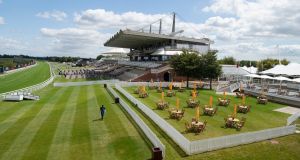 The first jockey to test positive for coronavirus in Britain since racing resumed behind closed doors there over two months ago has been confirmed.

The British Horseracing Authority said an unnamed apprentice rider tested positive for Covid-19 but has not ridden for a “few weeks” and has not been racing since being found to have the virus.

A BHA spokesman said on Sunday: “Having been notified that an apprentice jockey had tested positive for coronavirs the BHA has worked with the health protection agency, the jockey and their yard to assist their employer in following government guidance and managing the jockeys’ recent contacts.

“A handful of people have been identified and asked to self-isolate for 14 days as a result. Further tests taken by close contacts have not returned any further positive results.

“The jockey in question has not taken a ride for a few weeks, though attended a recent race meeting as a member of stable staff, prior to showing any symptoms and before their positive test.”

Separately, there was no luck for Irish-trained runners in Group One races in both France and Germany on Sunday.

Johnny Murtagh’s Know It All was a close third behind the odds on favourite Watch Me in the Prix Rothschild at Deauville, just missing out on second to the Godolphin outsider Half Light.

Silence Please and Tom ‘Socks’ Madden looked to briefly head Miss Yoda in the straight but faded in the closing stages.

Madden now faces a 14-day spell on the sidelines due to quarantine restrictions on his return to Ireland.

No drum roll is likely for an €11,000 maiden at a Bank Holiday Monday meeting in Naas but the Derby third Amhran Na Bhfiann should still be able to secure the first victory of his career.

Aidan O’Brien’s regally-bred colt belied 66-1 odds on just his third ever start when half a dozen lengths behind his stable companion Serpentine at Epsom a month ago.

For all that it was messy and unsatisfactory race in some respects, it was still a notable step up from a horse whose main claim to fame up to then was a near €1.5 million price-tag as a yearling.

The full brother Oaks winner Was drops back to a mile and a quarter for Monday’s race but an official 110 rating is hard to argue with in this context whatever the trip.

The preceding maiden however underlines the danger of taking ratings too literally.

So Wonderful is a 102 classic-placed talent that still has to win a race after 13 tries.

O’Brien sticks first-time blinkers on the filly who proved a real let-down on her last start at Gowran behind Never Forgotten.

Maybe the new headgear will do the trick and help So Wonderful finally get her nose in front. If it works then she is rated to rout this opposition. But it still represents a big ‘if.’

The Naas feature is the Listed Arqana Marwell Stakes and a drop back to the minimum trip could be just what Frenetic requires.

There is jumps action at Roscommon where Western Victory will be expected to be an aptly named winner of a Beginners Chase.

The newcomer Wearapinkibbon is Willie Mullins’s sole runner on Monday in a finale also containing a rare bumper runner for John Oxx. O’Carolon is a son of the trainer’s finest runner, Sea The Stars.