HRI will prioritise getting owners back to racecourses 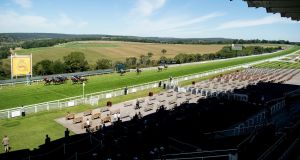 Goodwood was expecting to welcome back 5,000 fans on Saturday before the UK government did a u-turn. Photo: Edward Whitaker/PA Wire

Horse Racing Ireland has said its “first priority” under any potential lifting of coronavirus restrictions by the government next week will be to allow owners back onto racecourses.

An announcement is expected next week in relation to whether or not phase four of the government’s roadmap for national recovery will be implemented or further delayed.

Implementation is expected to see a limit on outdoor gatherings increased to 500 from 200, a move with significant implications for attendances at sporting events here.

However the British government’s 11th hour decision on Friday to stop fans watching some ‘trial’ events on Saturday – including racing at Goodwood – underlined the uncertainty surrounding any relaxation of Covid-19 restrictions.

Officials at Goodwood admitted to being “gutted” by the late cancellation but Ireland’s racing authorities were keen to draw a distinction between the situation here and the other side of the Irish Sea.

“In common with other organisations hoping to welcome back people to our sport we will be watching to see if the restrictions due to be lifted under phase four of the roadmap go ahead on August 10th.

“Until then we will obviously be fully aligned with government advice on the matter.

“But should the decision be taken to allow outdoor gatherings of up to 500 people, getting owners back on the racecourse will be HRI’s first priority,” a HRI spokesman said.

Separately, Galway race week winds up on Sunday as part of a rare glut of Bank Holiday weekend action with half a dozen fixtures in three days.

The most valuable contest is Sunday’s €90,000 Ahonoora Handicap where last year’s winner Laughifuwant is back in a race that had been won by cross-channel raiders in each of the previous five years.

It’s ‘domestic only’ this time though and includes Njord, beaten by a nose in Tuesday’s big mile handicap, who will try to go one better over a shorter trip.