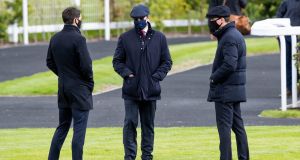 Aidan O’Brien, Ireland’s champion trainer on the Flat for the last 21 years, and his son Donnacha, who recently saddled the French Oaks winner Fancy Blue, have become the latest Irish trainers to be fined and banned from attending racecourses for breaches of the strict anti-Covid 19 protocols in place since racing resumed in the country in June.

Both trainers were fined €2,500 (£2,200) and banned from attending race meetings for two weeks for breaching the rules on Irish 2,000 Guineas day at the Curragh on June 12th, four days after racing resumed behind closed doors in Ireland. Donnacha O’Brien’s racecourse ban will begin on Tuesday, while the Irish Horseracing Regulatory Board’s disciplinary panel accepted a submission from Aidan O’Brien asking for his ban to be suspended until next Monday. It is believed that the suspension would be reciprocated by the British Horseracing Authority in the unlikely event that either trainer applied to attend a racecourse in Britain during their Irish suspension.

Both trainers completed all the necessary forms and health questionnaires required for attendance, but then failed to enter the Curragh through the designated screening area. “The various protocols regarding Covid-19 are very serious,” Niall Cronin, the IHRB’s press officer, said on Monday. “It is important that they are strictly adhered to at all times to makes sure that racing can continue in a safe manner for everyone involved.”

Aidan O’Brien saddled six of the 11 runners in the Irish 2,000 Guineas including the second, third and fourth horses home behind Ger Lyons’s Siskin. Donnacha O’Brien, meanwhile, had two runners on the card. Both the fine and the length of suspension handed down to the O’Briens are significantly below the penalty imposed last month on Emmet Mullins, a nephew of leading trainer Willie, for a breach of the Covid-19 protocol at Leopardstown on June 14th. Mullins was fined €5,000 (£4,460) and banned from all tracks for three months for the more serious offence of gaining entry to the course having already been refused admittance for not having the necessary barcode which proves compliance with pre-entry protocols. – Guardian