‘It has to stop. Everybody has kept quiet for too long’ 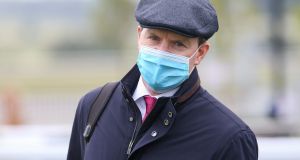 Aidan O’Brien: “It’s not the horse’s fault, or the trainer’s or the owner’s. People’s lives have to be respected.”

Aidan O’Brien has spoken out against “stone age” race-riding tactics and called for a culture change in the way stewards enforce the rules on interference. The dominant Flat-racing trainer was careful to confine most of his comments to Irish racing but also noted a couple of incidents in Britain this year that had irked him, and said it was time for a plain-speaking discussion in public after years of discreet lobbying of the authorities had failed to bring change.

“What we all want is the best horse to win all the time,” O’Brien said, speaking with a measure of anger he rarely shows. “There was an old thing of jockeys closing the door on other jockeys and not letting out other jockeys and taking their ground. I think that’s all stone-age stuff and it’s dangerous.

“This thing of horses drifting off their lines and drifting into the rail and the stewards saying it’s race-riding, that is all absolutely nonsense. I think no horse should ever stop another horse from winning. It’s not safe, the things that are allowed to happen.

“Over the last few years, the senior jockeys are allowed to do these things. I’ve seen riders getting injured in falls and (the jockeys responsible) get suspended for careless riding; that’s not careless riding, that’s dangerous riding and those suspensions, they should be weeks, not days. And that’s the only way it’ll be stamped out.

“It has to stop, in my opinion. Everybody has kept quiet for too long. Jockeys have to start having respect for each other. The suspensions need to be big. It’s not the horse’s fault, or the trainer’s or the owner’s. People’s lives have to be respected.”

O’Brien was speaking in support of an article by Kevin Blake on the Attheraces website, calling for stewards to enforce existing rules with greater rigour in Britain and Ireland, accompanied by a shocking video compilation of incidents from both countries. Blake’s article was retweeted by senior racing figures like the jockey Jim Crowley and the trainer Stuart Williams, who added: “These incidents would not be allowed to happen in any other major racing jurisdiction in the world”.

Echoing a point made by Blake, O’Brien believes the existing rules should be sufficient to deal with the problem of interference, if applied correctly. “The stewards have to step up to the plate. It’s doing racing an injustice because it’s stopping people from getting involved. We need punters to have confidence, to be able to have a bet and be confident that the best horse won. And the most important thing is, we’ve seen jockeys get bad falls and we’ve seen jockeys get badly injured and it’s because it’s not being policed properly.”

Blake’s article applied to both Britain and Ireland, though he feels the more serious incidents occur more often in Ireland. O’Brien said: “We don’t ever say anything in England because we’re always only visitors and we feel very grateful to be welcomed in England. It wouldn’t be our place to comment on England.

“But in Ireland, we have been on to them (senior officials) for the last five or six years. And it’s a little bit sad because nothing’s being done about it. The stipes are saying, this is race-riding. That’s race riding in the stone ages, not in today’s world. Jockeys have to do everything reasonable to keep their lines and they don’t. You see jockeys having to snatch up and it’s only a matter of time before there’s somebody seriously injured.”

Without wanting to name names, he objected to a couple of incidents in Britain that drew no official sanction. Of one opposing jockey, he said: “He wasn’t going to win but he leaned on Ryan (Moore) all the way up the straight, so Ryan couldn’t win either.”

The ruling bodies in Britain and Ireland indicated that no imminent change is planned in this area. A spokesman for the Irish Horseracing Regulatory Board said: “The safety of horse and rider is paramount at all times. The stewarding committee continually monitors the rules and we continue to strive for proportionate sanctions and greater consistency on a daily basis.”

The British Horseracing Authority also emphasised safety and said there had been a 33 per cent reduction in the rate of interference offences since 2010, a statistic that appears open to more than one interpretation. The BHA also pointed out that the rules in this area had been addressed just four years ago.

A spokesman added: “We are always prepared to discuss regulatory matters with participants should their representative bodies make us aware of widespread concern, and in relation to riders have an established process for this through the biennial seminars which all jockeys are required to attend. Additionally, we continue to engage with the independent Judicial Panel to ensure the topic of rider and horse safety is considered sufficiently when interference cases are heard on appeal.” - Guardian