Organisers ‘forging ahead’ for December’s European Cross-Country in Dublin 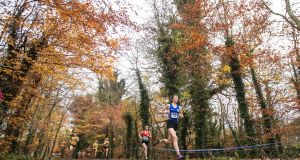 The venue is secured, the hotels booked, the timetable approved and the broadcast rights in place, only there’s still the inevitable uncertainty around Dublin’s staging of the European Cross-Country Championships in December.

They will, like most sporting events over the coming months, be entirely depended on the containment or otherwise of Covid-19. For now the event organisers, headed by Liam Hennessy, are planning for the December 13th date as they normally would, yet conscious of making any definite predictions either way.

Last December’s event in Lisbon featured 602 athletes, 336 men and 266 women, from 40 countries, with similar numbers expected this December: for now it remains one of the few international sporting events of that magnitude not yet cancelled or postponed into 2021.

“We’re forging ahead on all fronts like that, but ultimately the decision will be made by European Athletics, and the Government, in terms of what their guidelines will be,” says Hennessy, the former president of Athletics Ireland, who also sits on the European Athletics Covid-19 task force.

“There are a lot of moving parts, and we’ve progressed so far as one possibly can. We’re well advanced in our overall organisation, the infrastructure, all of that, but we’re fully aware of the situation.

“But there will be some timelines, coming up at some point. And these won’t be the week before. We have further meetings this week, but it’s still too early to say. When to say though, that’s the crucial time. But if there is still a situation around quarantine, say, there isn’t a remote chance of it happening.”

Set for the purpose-built course at the Sport Ireland campus at Abbotstown, the championships recently found themselves clashing with the All-Ireland hurling final, also currently reset for December 13th, again Covid-19 permitting.

“I’m inclined to stay neutral, in my own head,” says Hennessy, when asked about his hopes the event will happen as planned. “It’s the same for the athletes, I think, pressing on while understanding the situation. You look at where we are now, we were getting a little more optimistic, and then things were paused again until August 10th. That’s understandable, in a sense, the way things are going.”

Turin is already signed up to stage the 2021 championships, which may or may not impact on any potential decision to postpone Dublin. “And it may be a question of having some compromise, as opposed to having nothing,” says Hennessy. “But as for the ‘what ifs’, we just don’t have the answers yet. Of course that uncertainty is frustrating for everyone, especially the athletes.”

One of those athletes is Lizzie Lee, who captained the Irish women’s team to bronze medals at the 2015 championships, and is eying a return to competitive running after giving birth to her third daughter, Jess, last December.

After the Dublin Marathon was cancelled last month, where Lee finished third best woman in 2018, the cross-country event became even more attractive.

“I think it was responsible, calling Dublin off early, everyone knew it was the right call, but that was devastating,” says Lee. “I thought that would get me through lockdown, and with nothing to aim for in the next six months, I thinkI’d crack up. So in my head, I’m thinking Euro Cross is still happening, and the thought of putting on another Irish vest, in Dublin. And I adore that course.

“So if it goes ahead, I’ll do my utmost to make that team. I have fire in my belly for that. If you look at the women’s field, it’s about 60 runners, it’s not 10,000. This is changing so much, week by week, you couldn’t script it, but of all the races, and all the things that are going to happen between now and Christmas, I think cross-country is the most manageable, the easiest to control.

“And you’ve to let people into Abbotstown to watch, so you can stop them if needs be. It’s not like people running around the streets of Dublin. So I’m going to cling on to it.”

1 Saracens’ emphatic opening salvo enough to keep Leinster at bay
2 Next stop the Champs-Elysées in green for Sam Bennett
3 Saracens deliver the brutal blueprint on how to beat Leinster
4 Maro Itoje proves he has no peer in the northern hemisphere
5 Born to ride, born to win: Sam Bennett, the making of a green machine
Real news has value SUBSCRIBE