Cheltenham: Davy Russell looking to put last year’s blip behind him from the get-go

Abacadabras could get Cork jockey off to flying start on Tuesday 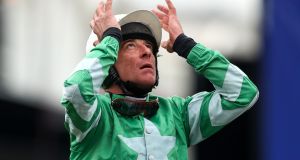 Davy Russell doesn’t have long to wait for a chance to settle a score with the Cheltenham festival. He teams up with the number one horse in the very first race, Abacadabras, one of the favourites for the Skybet Supreme Novices Hurdle.

The 2020 festival’s ultimate young starlet, Envoi Allen, might have lined up but he waits instead for Wednesday’s opening novice contest.

Such depth of resources makes Russell a general second favourite to get the leading rider award at the end of the week. Only Willie Mullins’s jockey, Paul Townend, is shorter in the betting and reflects how most punters believe normal service is about to resume.

That’s because last year saw one of the finest riders of his generation fail to have a winner at the meeting that matters most.

It was a jolt for someone who’d partnered at least one for each of the previous 13 years and landed the leading jockey award in 2018.

The four winners he rode on that occasion contribute to an overall tally of 22, one behind Richard Johnson. Only Barry Geraghty (38) is ahead of them among current riders.

So the ingredients for a potentially huge week are in place, including Coeur Sublime in a wide-open Unibet Champion Hurdle. Presumption is dangerous though in a game where disaster is always lurking just an obstacle away.

Russell realises that better than most. There was a time when last year’s blank would have gnawed at him. But at 40, and with one of the sport’s great careers in his own locker, the man from Youghal has hard-earned perspective in the locker.

“There was a lot played on about it, riding a winner every year since I started riding winners there. But you move on. You have to. There’s no other choice,” he says.

Nevertheless hints of last year’s frustration are evident in how quickly he recalls the details of when getting closest to maintaining his enviable festival winning streak. Coeur Sublime was runner-up to Pentland Hills in the Triumph. But it’s Delta Work’s third in the RSA that clearly still niggles.

“I got there plenty early on Delta Work. I thought with Coeur Sublime, the whole race, from the start to taking off at the last hurdle was perfect. He just wasn’t good enough. But Delta Work was good enough.

“But Delta Work was good enough. If you’d run the race two or three times he could have won it,” he says.

Delta Work might prove him right in Friday’s Gold Cup, although it will be bitter satisfaction as Mark Walsh is set to do the steering. Russell remains loyal to Presenting Percy for steeplechasing’s ‘Blue Riband’ which he memorably won on Lord Windermere in 2014.

Gordon Elliott provides him with the bulk of his ammunition this week including his other opening day mount, Galvin, in the novice handicap chase.

Already though anticipation is growing around Envoi Allen’s attempt to stretch his unbeaten record to eight in the Ballymore Novice Hurdle.

Racing fans are always suckers for the excitement generated by a rare young talent with the potential to soar. The last such instance was Envoi Allen’s stable companion Samcro, who had the world at his feet when winning the Ballymore two years ago.

Even if Samcro’s record of one win in seven subsequent starts serves as a cautionary tale the appeal of potential will always be undimmed.

“This will be his toughest test so he will have to have a little bit in the locker. We don’t know. We haven’t really dipped him,” he said. “He’ll have to [have something in the locker]. If he doesn’t, he’s just as good as the rest of them.”

“He was a very, very good horse for Dermot Weld. Envoi Allen is in the same category,” he said before dismissing previous speculation about a Champion Hurdle bid. “That was only someone looking for something to talk about. It would never have entered my head he’d run in a Champion.”

That’s Coeur Sublime’s role on Tuesday and he goes into an open contest not without expectation.

“He’s not been seen since Leopardstown at Christmas and has had a wind operation since then. He will have to step up on what he has shown this season but I’m hopeful,” Russell reported.

Before that there’s a first spin on Abacadabras to look forward to. Victory would set a perfect tone for the week.