Betting shops in Ireland told to close their doors 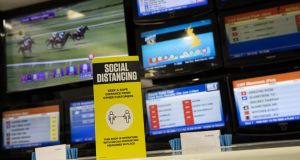 Ireland’s betting shop sector is seeking urgent clarification from the government about whether or not it will have to remain shut until June 29th.

In what has been described as bolt from the blue, over 800 betting shops in the country have been told to close due to a public health statutory instrument published last week.

That publication came after betting shops were given a green light to trade again from June 8th under phase two of the national plan for the reopening of business due to the coronavirus pandemic.

It meant some shops opened on Monday of last week although the big chains delayed reopening until this week to ensure social distancing measures were in place.

However when news of the public health guidelines started to emerge, Paddy Power and Ladbrokes closed their shops in Ireland on Tuesday although other firms remained open.

With confusion reigning, the Irish National Bookmakers Association, which represents 765 of the country’s 814 betting shops, is urgently seeking clarification from the government.

“The government published a statutory instrument last week. It only became available to us yesterday (Monday.) That lists the sectors that are not included in non-essential retail for the purposes of the acceleration of openings.

“It listed licensed betting shops in it. It simply states licensed bookmakers as per the 1931 betting act, section 27.

“This is different to what we understood was the accelerated programme and our shops had opened on June 8th,” said the IBA chairwoman, Sharon Byrne.

She said that as things stand the statutory instrument is the current legislation and that betting shops cannot operate until the third phase of reopening on June 29th.

It came as a blow to the sector on the day the Royal Ascot meeting opened in England. It promised an upturn in business after reports of slow turnover when shops opened on Monday.

“Betting shops throughout the country had reopened based on the government’s approach to reopening retail outlets in general.

She added: “We’re very surprised. We’re not like concerts or theatres. We’re small retail with low numbers of staff. We have very strict procedures in place. There is definite social distancing. It can be absolutely compliant.

“The independents have traded since Monday last week. The larger guys opened yesterday because they needed an extra week to have their estate ready.”

That delay with the major chains reflected how the initial government green light to reopen in phase two had caught the sector by surprise.

Betting shops had previously been closed in Ireland since March 16th due to the Covid-19 health emergency.