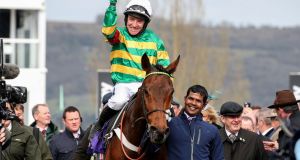 The coronavrius pandemic inadvertently supplied Barry Geraghty with an apt cue to bring the curtain down on one of the great careers in modern Irish sport.

It’s over two weeks since jump racing resumed behind closed doors in Ireland due to Covid-19 but without one of its most famous figures.

So the record will always be that Geraghty’s last winner was on the Willie Mullins-trained Saint Roi for JP McManus in the County Hurdle on the biggest stage of all at the Cheltenham festival in March.

It’s an entirely fitting statistic for a man who over the course of two decades thrived on the big occasion like few in the sport’s long history.

Even among a peerless generation of riding talent Geraghty was distinctive for the overwhelming cool he brought to bear when the tension was highest.

He filled the boots of the greatest winning machine of all when AP McCoy retired in 2015, becoming No1 rider to owner JP McManus, yet was never going to try and emulate McCoy’s manic drive for any sort of winner at anytime and anywhere.

Instead his thirst for the big winner on the big day echoed his contemporary Ruby Walsh but without the asceticism the latter seemed to cultivate at times.

Geraghty’s popular image was much more nonchalant. “Pressure is for tyres,” he once proclaimed with a grin after a big race victory.

No one who has been crowned champion jockey at 20, and 20 years later notches up five more Cheltenham festival winners, can sustain that success over such a prolonged period in the toughest game of all without granite-like substance.

But the pressures and inevitable injuries that come from riding horses over obstacles usually got carried off with easy charm.

If Geraghty never seemed to get distracted from the job in hand to the extent of another gilded contemporary, Paul Carberry, then neither did the task of getting to the winning post in front ever seem like a grim business.

Perhaps it helped him be crowned RTÉ’s sports person of the year all of 17 years ago. That was after having been leading jockey at Cheltenham in 2003 and also victorious that year in the most famous race of all, the Aintree Grand National, on Monty’s Pass.

“You see some fellahs after they’ve been beaten and they’re absolutely gutted. We all get our disappointments but if it happens, it happens. There’s not a lot anyone can do once it’s over. There’s no point hopping your head off a wall over it,” he once said.

The danger of such perspective can be that it gets mistaken for frivolity by the witless.

“What a lot of people don’t realise is how tough he is and how brave he was as a rider,” said Davy Russell, the last active jockey of a golden generation of Irish riders. “He was always a good tough competitor but I didn’t realise until later in my career how tough he was. He is literally made of iron.”

That can be correct since the litany of injuries acquired by top jump jockeys means various bones often need knitting together.

“I’ve missed 18 months of the last five years through injury, having broken both legs, both arms, my ribs, shoulder blade and a few other small fractures in between,” Geraghty elaborated on Sunday.

Some felt a broken leg at last year’s Aintree National meeting was a timely retirement cue for someone with most everything won and nothing left to prove. He was determined however to stop on his own terms.

Knowing it would be his last Cheltenham festival, and knowing too of persistent racecourse whispers that he was “gone”, all that famous big race sangfroid emerged for a hurrah that turned out to be final.

Epanante’s Champion Hurdle victory was a microcosm of that capacity to get it right when it counted most, the McManus-owned mare ultimately sweeping through to win in style.

Later in that contentious week there was a jaw-dropping RSA Chase that saw Geraghty rescue victory from seemingly inevitable defeat on board Champ before what proved to be his final festival ride of all on Saint Roi.

Shortly afterwards the much wider public health crisis meant racing closed down like everything else.

However as McCoy said on Sunday: “I’d imagine he might have liked to go out at Fairyhouse, his local track, or Punchestown. But Cheltenham was where he showed his true class and for him to go out after riding five winners there is the perfect ending really.”

The nature of jump racing is such that such perfect endings can’t be taken for granted. But once again Geraghty looks to have judged the timing of his run just about perfectly.