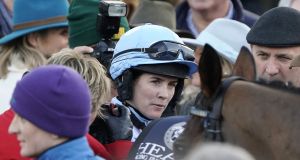 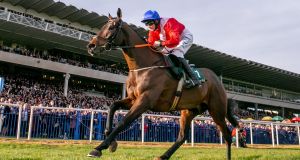 Rachael Blackmore winning on A Plus Tard at Leopardstown over Christmas. Photograph: Morgan Treacy/Inpho 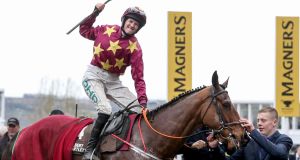 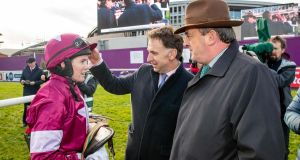 It’s often the pioneer’s lot to be defined by the mould they’ve broken. Rachael Blackmore doesn’t like being called a female jockey. She sees herself simply as a jockey. Perhaps her greatest achievement is that everyone else in racing does the same. But gender could crop up when the wider world tunes into next week’s Cheltenham Festival. There’s no avoiding it when trying to properly explain how one woman has transformed the face of a sport.

Only five years after taking the plunge into the professional ranks, Blackmore goes into National Hunt racing’s greatest week anticipating as impressive a book of rides as any other jockey at Cheltenham. She’s just 6-1 to follow in the footsteps of Ruby Walsh and win the leading rider award. Now that Walsh is retired Blackmore is becoming the new face of racing. Just a few years ago the idea of a woman in such a position was all but unthinkable.

The woman herself isn’t fond of hype either. It’s a rare Blackmore interview that doesn’t reference her reticence. Even the glossy, sponsored encounters that have accompanied the 30-year-old’s rapid rise to fame are rarely revelatory. The slight figure from Tipperary is more comfortable presenting an unobtrusive face to the world rather than embracing the trappings of her groundbreaking achievements.

But it’s not hyperbole to point out how she has altered forever perceptions of female jump jockeys and done so from the most unpromising of positions.

Blackmore’s decision to turn professional in 2015 barely registered within racing, never mind without. Nina Carberry and Katie Walsh had paved the way for female jockeys, but as amateurs. Blackmore was an amateur too but juggling riding with studies for an Equine Science degree at the University of Limerick, and later a business studies diploma from Griffith College in Dublin, yielded just seven winners.

Turning pro in search of more opportunities seemed a contradictory last throw of the dice so it registered as little more than a curio in the toughest game of all.

When it is a question of when, and not if, jockeys get badly hurt – with a fall once in every 15 rides on average – the deep-seated presumption had long been that it was too physically arduous a profession for women. Throw in lazy assumptions about a lack of physical strength to push a tired three-mile chaser in the mud and the odds were stacked against the newcomer.

Yet within two years she became the first woman to win National Hunt racing’s conditional jockeys title, effectively the jump game’s apprentice crown. She did that with 32 winners in a season. Last season Blackmore finished runner-up in the overall championship to Willie Mullins’s jockey, Paul Townend, on 90 winners. So far this season she is third in the table with 61 winners, behind only Townend and Davy Russell.

Time may yet prove that championship second to be Blackmore’s most significant victory. Such consistent excellence required widespread support from owners and trainers prepared to pay her the professional courtesy of being blind to sex. Competing without allowances against the very best, she got no quarter and looked for none. Blackmore is uncomfortable with talk of being a pathfinder for future generations but such a legacy is already assured.

Last season also saw a Cheltenham Festival breakthrough when A Plus Tard won a handicap by 16 lengths. On the final day she broke her Grade One duck on the 50-1 shot Minella Indo in the Albert Bartlett Novice Hurdle. It was the first time a woman had ridden a top-flight festival winner over hurdles. Acknowledging the significance of such successes without reaching for the ‘f’ word might be well-intentioned but ignores the context which makes Blackmore such a singular figure.

“Nina was brilliant. So was Katie. But this girl has taken it to a whole different level with her professionalism, her feedback and her will to improve,” says Eddie O’Leary, brother of Michael O’Leary, and key to the Ryanair boss’s Gigginstown Stud operation

“Rachael has to operate at a higher level than any of the lads because she’s a girl. She has to be fitter and stronger to be at the same level because she’s in operating in a man’s world.

“She has changed everything and she’s paved the way for a lady to be champion jockey. Hopefully it’ll be her and she would be champion jockey off level weights against men in the most competitive racing in the world.

“You can’t hide here. In England she could work away up the north or the easier tracks. But there are no slots here. You operate at the highest level or you go home,” he adds.

The O’Learys have been crucial to Blackmore’s progress. Apprentices briefly flourish in racing all the time before vanishing for want of opportunity. Gigginstown have provided such opportunities, principally through top trainer Henry de Bromhead with whom Blackmore has enjoyed huge success over the last two years.

A Plus Tard and Minella Indo are back for more next week. Her book of rides also include the unbeaten mare Honeysuckle in the Close Bros Mares Hurdle on day one. Earlier on Tuesday, Gigginstown’s Notebook is favourite for the Arkle. Minella Melody is a favourite on Thursday. On Friday Monalee is not without hope in the Gold Cup.

Put together they represent easily the most potent team of horses any woman has looked forward to riding at Cheltenham. In terms of impact and visibility that’s important.

At no other time in the year is racing more to the fore of the general sporting consciousness than next week. Racing’s nuances can feel intimidating to the uninformed. But no expertise is required to appreciate the significance of an iconic title such as the Cheltenham Gold Cup, or what status is conferred on the winner of the leading rider award. Barry Geraghty won in 2003 and later that year secured Sports Personality of the Year.

Five years ago the concept of a top professional female rider in the running for such status was all but unimaginable. Blackmore has flipped that on its axis through ability but also rare single-mindedness.

Brought up in a non-racing family on a farm in Killenaule she didn’t have thoroughbreds on tap. Her mother Eimir is a teacher. Her father, Charles, farms. Blackmore’s brother Jonathan is a graphic designer and younger sister Charlotte is a UCD law graduate. It’s a background removed from racing’s dynastic base. But in her self-effacing way she has unhesitatingly tackled every obstacle head-on, never wavering even in the face of the ever present threat of injury.

“I’ve seen her get creamed with falls and she’s back the next day with a plaster on her nose. And she’s only a slip of a little thing,” says Enda Bolger, a former top amateur jockey and trainer. “In my day you could pick the women riders out in a race from a mile away. But you wouldn’t pick Rachael out alongside Ruby, [Davy] Russell or Townend. There’s style and there’s skill. And she has a brilliant personality. I find her bubbly, very intelligent and she has a brilliant way of looking at things.”

Although there’s unanimity on Blackmore’s impact, perhaps it should be little surprise in a game of opinions that some – sotto voce – suspect the task of having to break down gender barriers has ultimately worked in her favour. It’s a strange inverse bias revolving around other male riders of similar ability supposedly not being as fortunate in terms of momentum-generating profile, a vital element in a game which, for all its self-conscious toughness, can be fickle.

A train of racecourse thought exists that judged by the highest standards, Blackmore can lack polish. It’s a view that didn’t quell when her foot slipped out of a stirrup on Monalee in the closing stages of a big race at Christmas. Contained within it perhaps is an attitude that a male jockey narrowly losing in such circumstances would have faced more criticism.

However, many others, such as the former Gold Cup and Champion Hurdle winning rider, Conor O’Dwyer ,dismiss such hearsay.

“She’s top class. Horses run for her. A jockey either has that or they don’t. She has them running in her hands, going forward all the time, and that’s a natural thing. She’s very brave too and asks horses [to jump] the whole time. She rides a very uncomplicated race. Gigginstown and Henry like to keep things simple and she’s usually in the first five or six. If they’re good enough they generally win,” he says.

Considering the hurdles she has overcome, Blackmore is unlikely to want for perspective on any specific resentments that might make her success appear inevitable in hindsight, or don’t account for the scale of her overall accomplishments.

Not many can claim to have transformed their profession. Blackmore can and a successful Cheltenham next week could see her pioneering progress reach another realm of wider public visibility. That will make the ‘f’ word inevitable. But Blackmore can console herself with the knowledge she has ensured the process of making it irrelevant is well under way.