Altior in good shape for Cheltenham after Newbury success

Native River another returning hero in the Betfair Denman Chase 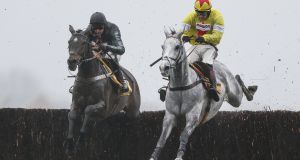 Altior is odds-on across the board to claim a third Cheltenham Festival victory in the Queen Mother Champion Chase after his class shone through on his belated reappearance at Newbury on Saturday.

Nicky Henderson’s charge has won the Supreme Novices’ Hurdle and the Arkle Trophy at Prestbury Park in the last two years and he will be a warm order to strike gold again on his return to the Cotswolds next month after proving his brilliance remains very much intact in the Betfair Exchange Chase, better known as the Game Spirit.

The eight-year-old had not been seen in competitive action since last spring after a wind operation ruled him out of the first half of the season, but he was pretty much faultless as he comfortably accounted for the top-class and race-fit Politologue by three lengths without being asked for maximum effort.

Native River was another returning hero in the Betfair Denman Chase.

The Colin Tizzard-trained chestnut had been sidelined since finishing third in last season’s Cheltenham Gold Cup, but looks a major player for the blue riband once again after claiming this Grade Two prize for the second year in succession under champion jockey Richard Johnson.

Johnson is confident Native River will make his presence felt in the Gold Cup, for which he is a general 6-1 shot.

Another boost for Tizzard was a treble at Exeter on Sunday suggesting his string are back in rude health.

Kalashnikov provided Amy Murphy the biggest success of her training career with an impressive victory in the Betfair Hurdle.

The five-year-old looked a high-class prospect and he was far from disgraced when losing his unbeaten record in finishing second in last month’s Tolworth Hurdle at Sandown.

Making his handicap debut in one of the most fiercely competitive races of the season, Kalashnikov was an 8-1 co-favourite in the hands of Jack Quinlan and while he was under pressure a long way from home, he dug deep in the home straight to battle his way to to the front and go on to score by four and a half lengths from Irish challenger Bleu Et Rouge.

Kalashnikov was cut to as short as 8-1 for the Supreme Novices’ Hurdle and Murphy confirmed the Cheltenham Festival curtain-raiser is the likely next port of call.

The four-year-old is a general 10-1 shot for the Champion Bumper at Cheltenham, but Honeyball said: “I guess we have to look at the Cheltenham and Aintree bumpers. He has run quite run a lot already and we might have to skip Cheltenham as that might bottom us out a bit. Aintree would possibly suit better.”

Saint Calvados booked his ticket to the Arkle Trophy after extending his unbeaten record in Britain to three in the Betway Kingmaker Novices’ Chase at Warwick.

Harry Whittington’s inmate had earned the step up to Grade Two level after trouncing his rivals in successive handicaps at Newbury and comfortably obliged as the 4-9 favourite.

Bookmakers were impressed with quotes of 7-1 and 8-1 given to Saint Calvados for the Arkle.

Benie Des Dieux made it three wins in as many starts over fences for Willie Mullins in the BBA Ireland Limited Opera Hat Mares Chase at Naas.