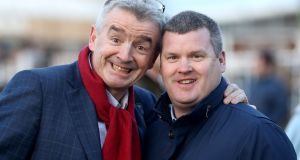 Gordon Elliott is keen to acknowledge Michael O’Leary’s role in his remarkable rise to prominence over the last dozen years. Photograph: Bryan Keane/Inpho

Gordon Elliott has conceded Michael O’Leary’s announcement that he’s winding down his involvement with the sport over the next five years came as a shock but he is determined to “keep the head up” and build for the future.

No trainer is more affected than Elliott by news that O’Leary’s Gigginstown Stud operation won’t buy any more new stock and plans to cease having runners within five years.

Just last month Elliott saddled O’Leary’s star Tiger Roll to win back to back Aintree Grand Nationals. It’s the latest in a series of major victories for the Co Meath trainer who also landed the 2016 Cheltenham Gold Cup for the Ryanair chief executive with Don Cossack.

On Tuesday, O’Leary rocked racing with a statement outlining his plans although he stressed his current string will continue to race in Gigginstown’s famous maroon silks for the entirety of their career. That he hopes will allow time for trainers to replace his horses over the coming years.

O’Leary said: “We wish to sincerely thank all our trainers and their teams for the enormous success we’ve enjoyed over the past decade.

“But as my children are growing into teenagers I am spending more and more of my time at their activities and I have less and less time for National Hunt racing, a situation that will continue for the foreseeable future.

“I hope that by running down our string over an extended four or five year period it will give our trainers ample time to replace our horses without disruption.”

Elliott was keen to acknowledge O’Leary’s role in his remarkable rise to prominence over the last dozen years. He saddled his first Gigginstown winner with Tharawaat at Navan in 2008.

Of course it’s a shock. But in this game there are shocks every day of the week.

“Michael is a businessman and he wants to spend more time with his kids,” Elliott said. "Obviously that’s a big loss to me and all of racing. But it’s not happening overnight so you have to respect the man for doing that.

“So we’ll keep the head up and keep going forward. It’ll leave more opportunities for [other] owners to come to the yard. Of course it’s a shock. But in this game there are shocks every day of the week.”

O’Leary, and his brother Eddie, who has overseen the Gigginstown operation, have developed one of the most powerful teams of horses ever seen in jump racing over the last decade.

They had almost a thousand runners in the last Irish season, divided between a handful of trainers including Elliott and Henry De Bromhead.

Eddie O’Leary, who runs his own stud farm near Mullingar, said the sport has always been a hobby for his brother whose growing family leaves him less time to go racing.

“It was a hobby for Mike and a hobby for me from my business. We’ve had a fantastic time with some fantastic horses and hopefully we’ll unearth a few more before we pull stumps,” he said.

Describing his brother as a “big family man,” Eddie O’Leary added: “This will run down. No one will be left short over the next four or five years.”

When someone pulls back, someone else always jumps in

He also dismissed concerns about Gigginstown’s exit leaving a major hole in the industry.

“When someone pulls back, someone else always jumps in. I’d say people will see an opportunity now to come and buy a good store [horse] where they wouldn’t before,” he said.

“Michael has put some of the best horses in the world into training in Ireland. His first Cheltenham runner was War of Attrition in 2004 and that’s 15 years ago. Take the next five years as well and that’s two decades at the top of racing. He has made a huge contribution.

“[But] nothing lasts forever and that’s the nature of this game. It’s cyclical. Racing will continue and we will continue to pursue the policies we always have in terms of prizemoney and competitive racing.

“It’s up to us to put on a quality race programme that will attract owners to have quality horses in training here,” he said.