Jim Gorman: ‘If everything goes well over there he’ll then go for the Ascot Gold Cup’ 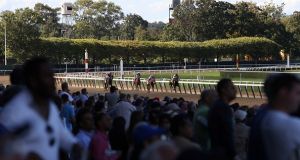 Prominent businessman Luke Comer will bid to continue the transformation in fortunes of his Co. Dublin training operation when bargain buy Raa Atoll contests the $400,000 Belmont Gold Cup in New York next month.

Raa Atoll paid an immediate dividend on his 30,000 Guineas purchase price last autumn when landing a Group Two prize in Berlin on Sunday.

The race was sponsored by the owner-trainer’s development company - Comer Group - which has extensive interests in Germany.

“If everything goes well over there he’ll then go for the Ascot Gold Cup,” Comer’s assistant, and former Curragh based trainer, Jim Gorman, confirmed on Tuesday.

Gorman was appointed to the assistant trainer position at the billionaire businessman’s stables in Kilternan in the summer of 2017.

It followed concerns expressed by racing’s regulatory authorities about the management of Comer’s establishment.

In November of 2017, the then Turf Club ordered Comer to pay almost €50,000 in fines and costs but allowed him continue to train racehorses from his Kilternan base.

Earlier that year, Comer had been fined €10,000 and ordered to pay €4,000 in costs after Turf Club officials were refused access to the yard. He was also handed a six month suspended sentence of his training licence, as well as being fined €2,500 for failing to arrange adequate supervision of his horses.

“It was huge for us to win a Group Two at the weekend after everything we’ve gone through,” said Gorman. “All that was two and a half years ago and everything has been perfect since.”

Comer currently has a string of 80 horses at his yard and Raa Atoll represents something of a coup having been bought for relatively minor money at the Tattersalls Autumn Horses In Training Sales last year.

The son of Sea The Stars won twice for Gosden in 2018 and was fifth in the King Edward VII Stakes at Royal Ascot.

“He was a good horse for Gosden and he’s a pretty decent horse for that price,” Gorman added.