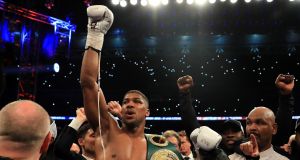 Whatever happens to Anthony Joshua, life will never be the same for him.

Freshly crowned and adored after destroying Wladimir Klitschko in front of a vast TV audience in 140 countries, not to mention 90,000 paying customers at Wembley Stadium on Saturday night, the humble young champion has perhaps a decade of glory in front of him, with titles, adulation and impossible wealth the prizes as he strives to cash in on two powerful fists and a personality of disarming alacrity.

By 2027 Joshua could be a retired billionaire or, if the fairytale sours, another disillusioned victim of the cruellest sport. As it stands, all looks well for the smiling assassin who still lives at home with his mother in Golders Green. “Can we go back to Wembley?” he wonders. “What more can we do, who can we do it with and for how long can we do it? That’s what I find interesting.”

But Joshua, at 27, has a wider vision and its sincerity is undeniable. “Charity,” he says, is a priority. “I like to give, for sure, to help people. That’s important. I want to invest because I like business.” And, after surviving the temptations of street life in Watford and avoiding prison for drug possession as a teenager, he would like to set an example for those who find themselves entranced by his fame.

“I know for a fact there is some kid somewhere who has watched what I’m doing and is, like ‘I can do that’. He’ll find himself in a gym and, somehow, he’ll go on and do better than what I’ve done.” But he is no messiah, he says. He knows he cannot prevent young people ending up in prison just because he is the world heavyweight champion and they want his autograph.

“I can’t stop ’em. The issue people have with politicians is, how can you talk about what’s happening in certain areas when you haven’t lived in certain areas? I can definitely relate to a lot of people. I wouldn’t mind doing prison visits, giving people a bit of inspiration, and just helping.”

Joshua wants to instil ambition into those who find his achievements inspiring. “I’d never sit with the kids who’ve maybe had it tough and say: ‘Look, stay where you are.’ You can’t achieve what you don’t see. If you don’t see a Bentley, you’re never going to want to buy one. Invite them to places like this [we are sitting in an ornate and spacious mansion in St John’s Woodnext to the Ghanaian embassy].

“It’s important to show them, rather than rubbing it in their face, like ‘Look what I’ve got. You can look but stay away’. Instead it’s ‘Come and look, have a feel, be inspired and then use that’. Money isn’t everything. [BUT]I know some very wealthy people. They’ve never given me a pound in my life but they’ve given me a million pounds’ worth of knowledge and inspiration.”

If other, less discriminating money sharks are already circling for a piece of the champion, the man who owns two of the four main slices of the world heavyweight title, the IBF and WBA titles, is unsettlingly calm.

He says he might fight Klitschko again, although the odds are lengthening, Deontay Wilder, the WBC champion, or the recuperating and suspended Tyson Fury, perhaps, who fumes and tweets thunderously off-stage. Hearn says the next defence will probably be in October. It could be at the Millennium Stadium or Madison Square Garden in New York. Nobody knows, even Hearn and Joshua. There is much at stake. Disqualifying the menacing Mike Tyson, the quietly ambling Lennox Lewis and the robotic Klitschko, boxing has not had a properly charismatic and dominant heavyweight champion since Muhammad Ali. Joshua is an obvious, if unwilling, heir presumptive.

He laughs at the ridiculously premature notion that he could be ranked alongside Ali, Joe Frazier, George Foreman, Larry Holmes or any of the fighters from the division’s golden era. “Nah, because there’s too many opinions. Realistically, Klitschko, though.”

And, when Hearn speaks about taking him on the road to China, the Middle East, Africa and, of course, the United States, the way Ali spread his charm and message, Joshua will not be bulldozed. “He’s too excited at that,” he laughs, with a quick glance towards Hearn.

“I’m not in a rush to go anywhere. It’s nice to have some handcuffs on it at the minute.” He concedes the day will come, though. “If it gets to the stage where we want to travel abroad and a promoter links up, or HBO or Showtime can do a deal with Eddie, or a government funds it in Dubai or Africa, we’ll definitely go abroad. But it has to be right for my career. If it’s working in the UK at the minute, let’s not rush to change it.”

He thinks like he boxes: calculatingly. The priceless ability to ride a crisis got him through a sixth-round knockdown that momentarily threatened to wreck the dream on Saturday night and he was there, revived, to finish the job with chilling efficiency five rounds later. Those who might not have been watching before swivelled on their couches or have suddenly developed an interest in this engaging new hero.

And there is no escape for Joshua from the clutches of his gathering celebrity. Dr Dre and Sir Elton John, rock royalty of different types and eras, spoke with him before the fight and he says: “I was baffled. I was shocked. When I spoke to Dr Dre, he was acknowledging what we’re doing. I thought: ‘How am I speaking to Dr Dre?’ I also spoke to Elton John before the fight. He’s a Watford man. It feels surreal. But he’s following boxing, that’s what I’m saying.” Right now, Anthony Joshua is boxing.