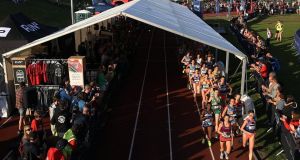 It was close to midnight on Thursday when the debate began to get a little heated and possibly one-sided. Whatever about the argument for and against the reopening of pubs and restaurants for some festive indulgence with the easing of the Level 5 lockdown, why wait any longer in reopening the country’s tracks and fields for some competitive running?

Sparked by the reminder the National cross-country was originally set for this Sunday, at the wide open fields of Abbotstown, two weeks before the European cross-country at the same venue (the latter already refixed for December 12th, 2021, same time, same place), the debate here was possibly more succinct: while many elite outdoor sports are back up and running, elite Irish athletes still have no racing whatsoever on the horizon.

It’s easy to see without looking too far that you can’t pull out of your driveway this weather and not risk knocking a casual runner off their stride. This is more about that lonely breed – the likes of Ciara Mageean, Mark English, Paul Robinson, Phil Healy – running fast into another Olympic year with no recent measure of their competitive stride.

Set against another weekend of outdoor sport around the country – the All-Ireland hurling semi-finals, women’s football and camogie, the Autumn Nations Cup, etc – it’s no wonder some elite Irish athletes are getting a little restless, more outspokenly their coaches too. Swimming pools and basketball courts may be entirely dependent on some level of restriction for several months yet, open roads and country fields naturally less so.

Athletics Ireland did manage to stage their National track and field championship back in August, across two weekends and behind closed doors, only since then all competition has been on hold, further restrictions imposed once Level 5 was introduced. According to their own guidelines, all “senior international athletes are defined as elite”, the Government in turn stating “professional, elite sports and senior inter-county Gaelic games, horse-racing and greyhound racing are permitted to continue behind closed doors” even in Level 5.

With this in mind Irish athletics coach Feidhlim Kelly spoke to this newspaper earlier on Thursday about the need for Athletics Ireland to show some “imagination and invention” when restoring elite competition. “I don’t understand why no effort has been made to put on some competition,” said Kelly, who coaches at the Dublin Track Club, his stable of athletes winning several distance running titles at those National championships. Joining his stable recently was Rio Olympian Mark English, plus rising 800m prospects Harry Purcell and Dean Cronin, so no room for any drowsy inertia there.

“Right now there is nothing whatsoever on the horizon. We’re looking at maybe putting on a mile over Christmas, trying to get something going, but no one has come to any of the athletes, asking what they need. They’re just left hoping, and it’s getting very frustrating. This is about their careers, not just championship qualification.”

In response Paul McNamara, director of high performance at Athletics Ireland, in fairness with the more unenviable job of trying to please all of the athletes, all of the time, said such discussions are continuing around how to best facilitate elite athletic competition post-Level 5

“There is quite a lot of activity going on behind the scenes,” he said. “The big challenge is the exemption level, and for the indoors, that can only happen at Level 2, or below. At the very elite end, the primary concern is the path that plays towards building Tokyo qualification, as the association is keenly aware of that, and doing what they can to make it happen.”

Which is where some social media debate heated up. Pierce O’Callaghan, long-serving athletics consultant who has always known that necessity is the mother of invention, suggesting the sport could temporarily stage some indoor events outdoors, covering the homestretch with a marquee to shelter the sprints and hurdles, along the lines of the recent European Cup 10,000m challenge in London.

Sonia O’Sullivan added that athletes need targets to aim for and test themselves against, as did Ciarán Ó Lionáird, who used the first lockdown to come out of a four-year retirement. Shane McCormack, who coaches Phil Healy, saying “if there is no leniency given it will be a travesty for the sport given concessions elsewhere”.

Kelly also cited a recent survey carried out by the Japanese athletics federation, where 571,401 athletes, 98,035 officials and staff took part in 787 races and track meeting from July 1st to October 4th, resulting in only one single case of someone involved contracting Covid-19 in the two weeks following.

Prof Kingston Mills, eminently qualified on both fronts as professor of experimental immunology and head of the Centre for the Study of Immunology at Trinity Biomedical Sciences Institute in Dublin, and a 2:13.55 marathon runner in his prime, also told The Irish Times that distance runners moving at any reasonable pace present no significant risk of spreading Covid-19, and that was back in May.

Anyway, for a little more balance on Friday I rang up Jerry Kiernan, knowing his love and knowledge of several other sports, including horse racing, and who still coaches elite runners including John Travers.

“It’s not oftentimes I agree with Feidhlim,” he said, “but in this instance he is absolutely spot on. He’s dealing with an elite group of athletes, and to keep everyone on side it is important to have some competition. That’s the emphasis of any elite group. Personally, I would be gung-ho for races too.

“If we could organise our national track and field, there’s no reason why we couldn’t organise our national cross-country. I would be inclined to draw a line under the juveniles, because not only have you a million juveniles running, you also have to bring their parents. You also have to try not to be selfish in this particular time, because we’re all kind of looking out for ourselves, and to my mind, the greater good is doing what Nphet says we should be doing.”

Which, Kiernan then suggested, isn’t always easy when watching some of the other sports back up and running: “Because as Feidhlim also pointed out, the GAA are having their games, and when they win, there are massive explosions of joy, everybody congregating, hugging and stuff like that, and you’re looking at that thinking, ‘we’re expected to wear masks, behave ourselves’, and these boys are gathering on the field and going crazy.

“And let’s not forget the GAA has to some extent been responsible for the second wave of the Covid virus, with their celebrations after the club championship finals and stuff like that.”

Either way with little debate around the evidence that the risk of spreading the virus is suitably low in non-contact outdoor sports, all they are saying is give running a chance.