Cooke leads the fight for gay and lesbian inclusiveness in athletics 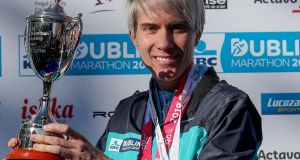 Aoife Cooke of Eagle AC after her victory in the 2019 KBC Dublin Marathon. “I would just encourage anyone to be themselves. Everyone has their own journey . . . but life is too short to hide away.” Photograph: Bryan Keane/Inpho

The small town of Russellville, deep in the heart of the Southern state of Arkansas, sounds like a strange place for a teenage distance runner from Ballincollig in Cork to start opening up about her sexual orientation.

About 75 miles northwest of Little Rock, population 27,920, and once called Cactus Flats before the Cherokee were forced off by the US government to make land available for white settlers, Russellville is best known these days as home to Arkansas Tech University, and to Arkansas Nuclear One, the state’s only nuclear power plant.

It’s also where a then 17-year-old Aoife Cooke followed the well-worn trail of Irish athletes taking up a US college scholarship – beginning from 1948, to be exact – and the start of her story which now stands suitably proudly on its own; the first Irish athletics champion to openly embrace and gently campaign for the gay and lesbian inclusiveness of the sport. Now read on.

In another lifetime, Cooke may have gone and come from the Tokyo Olympics already. Instead, that remains her sole target for 2021, and for good reason. In winning the national title that came with being the first Irish woman in the 2019 Dublin Marathon, she clocked a personal best of 2:32:34, moving her from 55th to fifth on the Irish all-time list, and within touching distance of Tokyo.

She only got to race once in 2020 before the pandemic took hold, so until the marathon season resumes again in the spring it’s business as usual; running twice a day, every day, except Sunday, when she does one very long run. Now 34, still perfectly young by elite marathon standards, Cooke admits winning that national marathon brought her some elite athlete attention for the first time, and attention in other ways too, which long after Russellville she felt entirely open and free about.

Home these days is Tower, near Blarney, where Cooke picks up the story ahead of a public webinar next Monday night, in association with Athletics Ireland and Sporting Pride: Standing Proud, My Life as an Elite LGBTQ+ Marathon Runner. Strangely or not, it was at Arkansas Tech University where she first felt perfectly comfortable in her own running skin.

“Growing up in Cork I was always very sporty, joining an athletics club at 11, and also played soccer, camogie, always out on the estate playing games. Sport for me was huge like that, I just loved being active. Once I had some running success around 15, 16, that became the priority. I was still only 17 when I went to America, didn’t turn 18 until a few months later, so that was young to pack up and leave, a big deal at the time, but it was definitely an adventure, I didn’t really know what I wanted to do after school anyway.

“It’s different now, I think, but for me growing up I didn’t even know anybody who was gay. It wasn’t something I thought too much about. I was so focused on running, engrossed in sport, I didn’t have time for boys, which is what I thought to myself anyway.

“So it wasn’t until in Arkansas that I fully came to the realisation myself, that I was gay. Over there I met a few students who were gay, got to know them personally, and that’s where it really opened for me. As it happens Arkansas isn’t the best place to come out, it’s still quite conservative, but my group were open, and you just draw to people who are more like yourself anyway.

“I told my friends, they were all fine, although I did get some stick from some other people. Then I came home that Christmas and told my family, and friends. So I didn’t feel like I was hiding it for very long. Once I came to the realisation myself, it just felt better to tell people, and I know I’m fortunate that my family and friends are so open. I never had to worry they might have a problem.”

As it turned out a series of injuries, then a diagnosis of osteopenia (low bone density) cut short her scholarship and Cooke returned to Cork after three years, finishing her degree at UCC. Russellville may have lacked the liberal US college atmosphere of the east or west coast, only her experiences there both forced and afforded the opportunity to continue her personal journey back at home, including more recently with the LINC resource centre in Cork.

“Being away in that new place, where people didn’t know me, had no previous expectation of me, possibly did help. Whereas at home, I was Aoife, she’s supposed to be who she’s been. That’s understandable. It took time for me to realise it about myself, so I accept other people took time to grasp it too. I also found you don’t just come out once, and that’s it. There’s always a time you meet people and they ask ‘have you a boyfriend’?

“But I don’t think it’s ever negatively impacted on my running, because all the people I ran with were aware, there was no issue. If anyone did have an issue I’d just keep away. When my athletics career improved again, around 2016, 2017, I’d identified as lesbian, had partners, and when I look back, my running and sexuality have at times helped each other, in a way. Running helped my self confidence, I don’t worry as much about what other people think, I know what I want, where I’m going, and that in turn helped me be more open about my sexuality.”

In August, Athletics Ireland celebrated 148 years of unbroken championship history, beginning in 1873. Cooke didn’t get to compete there, but can now mark her name down for one Irish athletics first in 2020: “Which is why once I was approached to do this webinar, it just made sense, I think there is a need for some role model in Irish athletics. Maybe because it’s such an individual sport, compared to the team sports, but I think it’s extremely important for people to know you can go into an athletics club, train at the top level, it’s not going to be an issue.

“My club Eagle AC are extremely supportive as well, but I do think if there were more elite athletes out, when I was 14, 15, it might have helped me be more open to it that bit earlier. There’s no onus on anyone, and I do think in elite sport, you’re so focused on your event, maybe you don’t want that extra stress. I would just encourage anyone to be themselves.

“Everyone has their own journey, and maybe their own reason for not wanting to come out. But life is too short to hide away. Some people may find it hard at the beginning, but I think once other people see that you’re happier, and you feel better about yourself, you’ll only worry why it took so long.”