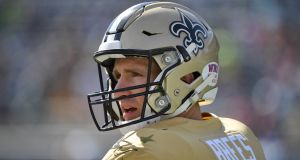 New Orleans Saints quarterback Drew Brees has apologised for his lack of “compassion or empathy” after he said he disagrees with athletes protesting against racism during the national anthem.

Brees registered his opposition to the non-violent protest movement launched by Colin Kaepernick during the 2016 NFL season in an interview with Yahoo Finance published on Wednesday.

The comments, which came in the wake of widespread civil unrest in the US after the police killing of an unarmed black man, George Floyd, sparked immediate backlash.

Brees’s team-mate Michael Thomas wrote in a subsequent post on social media: “We don’t care if you don’t agree and whoever else how about that.” Another of Brees’s team-mates, Malcolm Jenkins, posted a video to social media in which he became emotional as he said the quarterback did not understand that for many black people in America the flag represents centuries of oppression.

WOW MAN!! 🤦🏾‍♂️. Is it still surprising at this point. Sure isn’t! You literally still don’t understand why Kap was kneeling on one knee?? Has absolute nothing to do with the disrespect of 🇺🇸 and our soldiers(men and women) who keep our land free. My father-in-law was one of those https://t.co/pvUWPmh4s8

Stars from other sports also joined in with the criticism. LeBron James, arguably the most high-profile athlete in America, posted his thoughts on Twitter.

“You literally still don’t understand why Kap was kneeling on one knee??,” wrote the LA Lakers star on Twitter. “Has absolute nothing to do with the disrespect of [America] and our soldiers(men and women) who keep our land free. My father-in-law was one of those.”

Other NFL players to criticise Brees included his Saints team-mate Alvin Kamara, San Francisco 49ers cornerback Richard Sherman, New York Jets safety Jamal Adams and Green Bay Packers quarterback Aaron Rodgers. “It has NEVER been about an anthem or a flag. Not then. Not now,” wrote Rodgers, one of the few white athletes to respond to Brees’s comments. “Listen with an open heart, let’s educate ourselves, and then turn word and thought into action.”

On Thursday, Brees issued a lengthy apology on Twitter and Instagram, although he did not mention whether he had changed his views on anthem protests.

“In an attempt to talk about respect, unity, and solidarity centred around the American flag and the national anthem, I made comments that were insensitive and completely missed the mark on the issues we are facing right now as a country,” Brees wrote.

“They lacked awareness and any type of compassion or empathy. Instead, those words have become divisive and hurtful and have misled people into believing that somehow I am an enemy. This could not be further from the truth, and is not an accurate reflection of my heart or my character.”

Brees concluded by asking for forgiveness.

“I am sick about the way my comments were perceived yesterday, but I take full responsibility and accountability,” Brees wrote. “I recognize that I should do less talking and more listening . . . and when the black community is talking about their pain, we all need to listen. For that, I am very sorry and I ask your forgiveness.”

Brees is considered one of the best quarterbacks in NFL history. He is the league’s all-time leader in passing yards and touchdowns. – Guardian