OFI say restrictions should be eased for Irish Olympic hopefuls 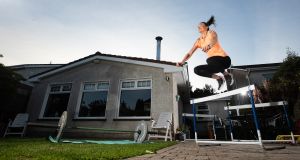 Irish Olympic hopefuls are facing a “significant disadvantage” over rival competitors in others countries due to the continuing restrictions in Ireland in the face of Covid-19.

Peter Sherrard, the chief executive of the Olympic Federation of Ireland (OFI), says the situation is becoming increasingly difficult and has called for a number of straightforward measures to be put in place to support prospective Olympic and Paralympic athletes during the current crisis.

“Irish sport and Irish athletes have been incredibly respectful throughout lockdown and will continue to support all the measures that need to be implemented,” said Sherrard. “While phased plans have been agreed for a recreational return to sport, we believe that the Olympic and Paralympic athletes who represent us internationally need prioritisation to return without delay.”

Even with the Tokyo Olympics postponed into 2021, some of the qualifying events are set to resume in the coming months. Sport Ireland, the Department of Transport, Tourism and Sport and the relevant Ministers have all been working on a request minor exemptions for Olympic and Paralympic athletes but there has been no green light to their requests to date, which ultimately must come from the Department of Health.

The measures being requested are for a very small number of prospective Tokyo athletes, approximately 200 across the country, in line with medically reviewed and internationally accepted health protocols.

According to Sherrard, the situation is becoming increasingly difficult, as more and more competitor nations return to training, putting Irish athletes at a significant disadvantage that may soon become too big to breach.

“To take one sport as an example, we have a situation at the moment where rowing clubs for recreational users in Ireland are open in line with government protocols, yet our Olympic rowers can’t access the water in line with those same protocols because they are living outside the permitted kilometre radius from their national training centre. The solution is a simple waiver from the relevant Health authorities for this small number of athletes so that they can travel the required distance to train, just as their competitors internationally have been granted weeks ago. Frustrations of this nature are being experienced by elite athletes from a variety of sports.

“Our Olympic Sports have all prepared very detailed protocols which have been reviewed medically for a return to the venues like the Sport Ireland Campus, the Sport Ireland Institute and the National Aquatic Centre and National Rowing Centre, in advance of, and in isolation from the general public, as is happening in other European countries.

“As a group, the athletes of Team Ireland have shown true resilience and have been role models to us all throughout this crisis, but the longer they are away from their high performance training environments, the harder it will be for them to return to optimum fitness and their peak performance in time for next year’s Games.”