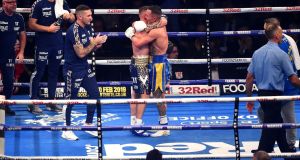 Josh Warrington upset the odds once again as he retained his IBF featherweight title after getting the better of Carl Frampton in a bruising 12-round battle.

The pair engaged in one of the contenders for fight of the year but Warrington, an underdog with the bookmakers having been so impressive against Lee Selby in May, largely came out on top in the exchanges at the Manchester Arena.

Warrington was therefore awarded a unanimous decision by two scores of 116-112 and one of 116-113 in the first defence of his world title as he extended his unbeaten professional record to 27-0.

Leeds-born Warrington is not renowned for his power, with only six of his wins coming inside the distance, but Frampton was stunned at several stages of the contest.

Victory completes a superb year for Warrington, who walked to the ring alongside Leeds United captain Liam Cooper, as he followed up his surprise win over Selby at his beloved Elland Road with another incredible display here to thrill the crowd.

Frampton perhaps shaded the support when the fighters walked to the ring but it was Warrington’s fans who were singing loudest by the end of the clash.

A subdued opening minute gave no indication of the fireworks to follow, Warrington lighting the touch paper for a staggering firefight in which Frampton teetered backwards after a left hook.

He recovered well but was reeling once again as Warrington barrelled forward and this time a right hook seemed to unsteady his opponent, who covered up as the Yorkshireman swung lefts and rights with abandon.

Once again, though, Frampton soaked up the pressure — although the sustained assault left him with a small cut under his left eye.

Frampton, though, showed all his ringcraft, landing a punishing right hook before spending most of the next two rounds boxing beautifully on the back foot, using his jab well to keep Warrington off balance.

Warrington, though, came on strong at the end of the fourth and then enjoyed the better of another toe-to-toe exchange in the fifth before Frampton soaked up another barrage in the next round after being caught on the ropes.

Frampton was boxing well at a distance but was being overpowered at close quarters and looked to be wobbled in the seventh before the pair engaged in another frenetic slugfest in the eighth — both fighters landing stinging blows.

The crowd was enraptured by the pulsating drama unfolding as an excellent one-two and uppercut from Warrington seemed to give him the edge in the ninth.

Several combinations in the 10th found their way through the tight guard of Frampton, who had been targeting the body, before both fighters swung wildly once more to end another absorbing round.

Warrington seemed the fresher of the two as the fight entered the final two rounds — and his fans were the more vocal as a deafening chant of ‘Marching on Together’ rang around the venue midway through the 11th.

Warrington closed the 11th with several furious one-twos and the fighters embraced before the start of the final round, the respect for each other palpable.

An accidental head clash in the final round gave Frampton a sizeable bump on his forehead and he was the more marked up at the end of the 12 rounds, leaving little doubt to who was the winner at the final bell.

On the undercard Billy Joe Saunders won in his first bout since vacating the WBO middleweight title, with late replacement Charles Adamu retiring on his stool at the halfway point of a scheduled eight-round contest.

Tommy Fury, the younger brother of former world heavyweight champion Tyson, made a winning start to his professional career with a 40-36 points victory over veteran Latvian Jevgenijs Andrejevs after four rounds.