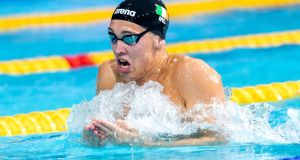 Team Ireland swimmers concluded a successful World Short Course Swimming Championships in China on Sunday with yet another Irish record, taking the total for the five swimmers over six days of competition to 11.

Conor Ferguson (backstroke), Darragh Greene (breaststroke), Brendan Hyland (butterfly) and Shane Ryan (freestyle) had all set individual records in their respective strokes across the week as well as a new record in the 4x50m version of the medley relay as they knocked an astonishing 18 seconds off the previous record set in 1991. The quartet combined for a time of 3:27.23, deleting the oldest men’s Irish short course record from the books, the previous record had stood at 3:45.66.

“It was great to race together this morning, this was our second time racing together at a major championship, so just to get the experience is what we need heading into the summer at the World Championships, where we hope to qualify the relay for Tokyo 2020,” said Greene.

Also, in action on Sunday, Niamh Coyne swam a huge three-second personal best in the heats of the 200m breaststroke. The World Youth Olympic silver medallist was swimming in her first senior international meet this week and clocked personal bests in all three of her swims.

The team in China have had three Top-10 performances with two semi-finals, a final and a medal for Shane Ryan in the 50m backstroke, Ireland’s first ever at a World Championships.

Looking ahead to 2019, national performance director Jon Rudd said: “We will keep our feet on the ground, as we know this was a short course event and it will be quickly forgotten come our trials at the end of March 2019 as we prepare for the next World Championships in Korea in the summer - with Olympic relay qualification and Olympic individual pre-validation both up for grabs.

“But a first ever medal at a senior world event and a five-athlete team that could not have done much more is most encouraging for all of us.”