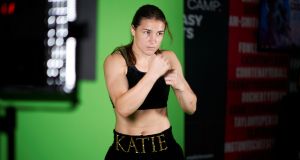 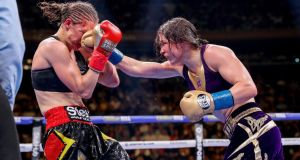 Drawing on what she has been saying this week and last, Katie Taylor has not just garnered intelligence from her first contentious Madison Square Garden dogfight with Delfine Persoon last summer, she has been making the alterations.

Meeting again on Saturday in the back garden of promoter Eddie Hearn’s mansion in Brentwood, Essex – a finger in the eye of Covid-19 – for the undisputed lightweight belt, Taylor momentarily stepped out of character to hit back at the Belgian’s goading. The Irish champion prefers to run than stand and fight trumpeted Persoon.

There is nothing the slugger would want more than Taylor to be gullible and forfeit her speed and technical superiority to go toe to toe, as she foolishly did in the latter half of their first meeting to almost halt an unbeaten run which is now 15 wins with 6 KOs and no defeats.

That the fight narrowly fell to Taylor caused grudge and resentment in the Persoon camp, which has not yet subsided, as well as the loss of her WBC belt.

The recent bitter jibes have been aimed at Taylor’s perceived hubris, a runner not a fighter. But the evidence of this week suggests that even if the champion did again feel obliged to take on Persoon at the brawling game, it’s not something she is going to attempt on Saturday night.

Telling Sky Sports “she needs to learn how to box. That’s probably why she lost in the Olympic qualifier against an unranked amateur fighter” was uncharacteristically cutting from the five-time amateur world champion and London Olympics gold medal winner.

“She’s the type who would say Floyd Mayweather runs as well, but he’s the best boxer of his generation,” added Taylor. “It’s called the sweet science.” Boom again. Her speciality has always been combinations.

All that time buried away in her Hartford, Connecticut apartment running the trails and training alone through the epidemic and Taylor has picked up a side of professional boxing which was alien to her at first, verbal wrangling. Serenely patient, she has come to understand that sweet and wholesome has its place.

Her Olympic reference was to Persoon’s involvement in the ill-fated Tokyo qualification event staged in the Copper Box in London’s Olympic Park in March before it was abandoned after three days. A number of boxers subsequently tested positive for Covid-19 but not before Persoon was beaten.

On the back of an injury-hit preparation, she struggled and lost a 4-1 split decision to Nikoleta Peta of Greece. Competing in the 60kg lightweight division, she was on the opposite side of the draw to Dublin’s Kellie Harrington. Harrington, the second seed, received a bye into the last 16 and did not fight before returning to Dublin.

Now back in her professional comfort zone, Persoon, defeated only twice in 46 outings, came in as Taylor’s opponent in June, when Puerto Rico American Amanda Serrano decided Hearn’s back garden was not right and her purse too light for such a risky bout. Taylor, the undisputed world lightweight champion, holds all four major belts, the WBC, WBA, WBO and IBF.

In between Christina Linardatou’s scalp was strung on her belt when the 34-year-old briefly moved up in weight to become a two-division champion in Manchester last November. When the judges’ decision to score the fight (97-93, 97-93, 96-94) in favour of Taylor the post -fight noise sounded familiar as Linardatou took out the jackhammer.

“I mean fake in that she is not undisputed, she didn’t beat me, didn’t beat Persoon,” said the infuriated Greek.

All well and good. But even with Serrano and her lippy coach Jordan Maldonado generating a blizzard of insults from the US, Persoon’s bloody assault had not disappeared from the horizon.

With a critical mass of people arguing that Hearn’s clout and Taylor’s spangled amateur career was too treasured to allow it to be devalued with a defeat, a quick settlement of sorts was probably the best way to halt the narrative, even if it has been hastily pulled together.

“This rematch was always inevitable since the first fight,” said Taylor. “The first fight has kind of being hanging over my head for this last year. I feel like I have unfinished business so I’m delighted that it’s made now and I have a chance to clear everything up.

Notwithstanding that pre-fight sparring usually generates more heat than light, Hearn’s words last week will have Katie watchers claiming he has stalled the process of her beatification.

“I mean Katie can be cold,” said Essex boy Hearn. I mean he’s ’aving a larf innie. But no, the mauling last time out was too close and too eventful in the wrong sort of way even for the queen of chill.

Expect a waspish, mobile Taylor taking the fight to Persoon from the outside with the Belgian trying to close down the ring and shape the bout towards a closer punching contest. As it progresses and both tire, Taylor’s superior speed and movement must hold or the slugging will, again, begin.

Taylor v Persoon is expected to start at around 9pm on Sky Sports Box Office. Dillian Whyte takes on Alexander Povetkin for the WBC interim heavyweight title at around 10.00pm.