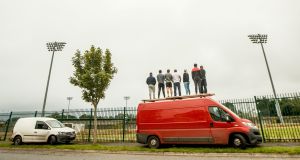 Lismore fans look on from outside the ground during the Waterford SHC quarter-final against Abbeyside Ballinacourty at Fraher Field in Dungarvan. Photograph: James Crombie/Inpho

Sports organisations have been dealt another coronavirus related blow with the Government decision that their events must all be held behind closed doors over the coming weeks. The measure is to last until at least September 13th.

Although the decision, which was taken at a Cabinet meeting on Tuesday on foot of advice from the National Public Health Emergency Team (NPHET), will not have any great practical effect given the current limits being imposed on clubs and associations, it represents a significant setback to the widely held hope that significantly larger attendances would soon be allowed through the turnstiles.

With 200 people permitted in recent weeks at many outdoor sporting events, associations had taken different approaches with regard to allowing persons not directly participating into venues. In the case of the Airtricity League, most clubs were allowing in the region of 50 supporters into games, with some drawing lots from among members or season-ticket holders.

Horse Racing Ireland, on the other hand, has not even been allowing owners into meetings and no spectators were due to be permitted into the Aviva stadium this weekend for the Pro 14 matches between Leinster and Munster on Saturday and Connacht and Ulster the following day.

One of the issues that all of the associations are likely to seek clarification on is the instruction that indoor training groups should be limited to six people indoors and 15 outdoors and that mixing of groups should be avoided, with exceptions for elite and professional sports and horse racing.

The IRFU said on Tuesday that it would await further detail on the latest Government position before commenting but interim FAI CEO Gary Owens described the changes being talked about as “disappointing because we have followed the guidelines and protocols carefully and have had no issues.”

He added, however, that everyone at the association understands the wider situation and accept that “we all have to play our part”.

The latest news, and the wider lack of progress, is undoubtedly a particular blow to the association given its challenging financial situation. It had been projected a couple of months ago that around 18,000 might be allowed into games at Lansdowne Road by the time the Nations League fixture against Finland came around but the game might now also have to go ahead behind closed doors.

After some speculation regarding the team’s other game next month, away to Bulgaria, it is now expected that the fixture will go ahead as originally planned with strict conditions imposed on players and backroom staff who would then be exempted from quarantine rules when they return to play the Finns on September 6th.

With regard to the club game, there had been an expectation at one point that league clubs would be able to have 500 at games and a hope that that number would fairly quickly rise to 5,000. Instead, grounds are set to remain almost empty for at least another four weeks with no obvious reason for optimism about the situation beyond that.

The GAA is similarly affected. Various club championship games have also been going on in recent weeks with players, coaches, club and other officials, medical staff and assorted volunteers making up the majority of attendances and as finals approach, most immediately in Wexford this weekend, there will be disappointment that far from matches being opened up to larger numbers, there has instead been this step back.

The intercounty season had already been considered to be in jeopardy with Croke Park stadium director Peter McKenna having observed that a ceiling of 200 at the stadium effectively amounted to games being played ‘behind closed doors’.