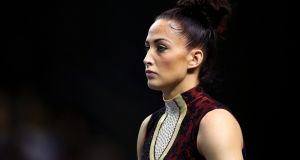 Lisa Mason said she was made to train until her hands bled. Photo: Alex Livesey/Getty Images

UK Sport has confirmed it is investigating the “shocking and upsetting” allegations of serious physical and emotional abuse of British gymnasts – with one former leading competitor claiming she had been locked in a cupboard and another saying they were forced to train until their hands bled when they were 10-years-old.

The funding body of Olympic sport in Britain also called on other gymnasts to share their concerns and said it would hold to account anyone responsible for such abhorrent behaviour.

UK Sport’s response came after one former athlete told ITV sport that young gymnasts would be shouted and screamed at and claimed she was once hit by a stick when she was doing a handstand.

Another, the former Olympian Lisa Mason, said she had been made to train until her hands bled. “My coach put me on the bars until my hands ripped and bled. My hands would then be pulled down and surgical spirit would be poured all over them. I would also have AstroTurf put under the bars so I would burn my feet if I didn’t keep them up. But everyone else is going through it, so you think it’s normal.”

Mason said some gymnasts are afraid to speak out for fear of missing selection for the Tokyo Olympic Games. “The Olympics is next year and we don’t want to rock the boat and upset the people who make those decisions,” she said.

It is understood allegations of ill-treatment have also been made by members of the GB team at the Rio 2016 Olympics.

A UK Sport spokesperson said: “These allegations relating to the treatment of young athletes within gymnastics are shocking and upsetting. There is absolutely no place for any sort of bullying or abuse in sport and anyone responsible for such behaviour must be held accountable, with support offered to those affected.

“We treat safeguarding matters with the utmost importance and all our investments into national governing bodies are contingent on a sport meeting standards set out by the Child Protection in Sport Unit.”

The British gymnasts were reportedly encouraged to speak out following the broadcast of Athlete A, which detailed physical and emotional abuse of gymnasts, in addition to the crimes of the USA team doctor Larry Nassar, who was convicted of sexual offences against hundreds of under-age American gymnasts.

UK Sport said it was vital others felt encouraged to come forward. “The integrity of the high-performance system is paramount and so we are quickly but thoroughly working to establish the facts with British Gymnastics before deciding on the appropriate response.

“It is essential all athletes feel comfortable to come forward and share concerns they may have in a safe and confidential environment. The British Athletes Commission is available to all athletes and offers independent, confidential advice and support which we’d urge athletes to use.”

It is understood British Gymnastics is bracing itself for fresh revelations. In a statement the governing body said it condemned “any behaviour which is harmful to the wellbeing of our gymnasts”.

It added: “Such behaviours are completely contrary to our standards of safe coaching. Our integrity unit investigates all allegations of emotional abuse and bullying that are reported to us or identified by our national network of club welfare officers and takes disciplinary action to prevent recurrence.

The BAC, which represents more than 1,200 members across 40 sports, called the comments made by the gymnasts “deeply troubling”.

“No athlete should be expected to tolerate an abuse of power or poor practice,” it said. “The performance environment should be a place of mutual trust and respect where athletes are supported in achieving their best. The BAC is worried to hear of athlete experiences which appear not to reflect these standards and would urge that any allegations are investigated thoroughly.

“As the independent membership organisation for Olympic and Paralympic athletes, the BAC supports any athlete that does not receive the appropriate duty of care and we urge any of our members, who may have safeguarding or welfare concerns, to contact us so we can provide independent, confidential advice and support if required.”

1 Worst sporting moment: White knuckle ride on a hate-filled night at Windsor
2 Shane Lowry right in the mix at Wyndham after brilliant 63
3 Sonia O’Sullivan: Russian Affair lays bare one of sport’s greatest scandals
4 Bundini Brown: The man who invented ‘float like a butterfly, sting like a bee’
5 Acute disillusionment the only response to growing FAI debacle
Real news has value SUBSCRIBE