Three-Test series gets underway in Southampton on Wednesday 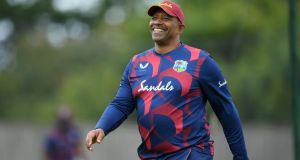 Phil Simmons, current West Indies and former Ireland head coach, believes England have provided a blueprint for the rest of the world as Test cricket prepares to resume in Southampton on Wednesday following a four-month hiatus.

A seven-wicket victory for New Zealand against India in Christchurch on March 2nd was the last Test staged before the Covid-19 pandemic struck, bringing the sport to a halt and leaving English cricket staring at a potentially wiped out summer.

But now through an ambitious, expensive plan that involves both the England and West Indies teams living and playing at grounds, while being subject to a twice-weekly testing regime and a swathe of social-distancing measures, international sport is back.

“It’s a huge blueprint for how cricket can move forward,” said Simmons, whose side arrived in the UK on June 9th and trained at Old Trafford before moving down to the Ageas Bowl over the weekend.

“We’re about to show that other places can start putting things together. The England and Wales Cricket Board have to be commended for all the work they have done to get the series on the road and let’s see what other countries take from it. People want to see sports because it lifts people, so hopefully this is the start.”

The three-match series is due to be played out to eerie silence behind closed doors. While TV viewers will have the option of adding a “Lord’s hum” to their coverage, the ECB confirmed on Monday that, contrary to reports, there will be no artificial crowd noise played in the ground, nor music between overs.

In a late switch, however, there will be a stadium announcer for events such as bowling changes, new batsmen and milestones. It follows concerns from the players after the warm-up games last week that the day lacked a sense of structure; anyone working in the nets, for example, would have no idea if wickets are tumbling.

It is just one example of the detail that has been covered off by the ECB as it seeks to recoup around £180m of broadcast revenue this summer. Another is the medical protocol that allowed Simmons to leave the West Indies camp to attend his father-in-law’s funeral last week, before a spell of isolation and further tests upon his return.

This compassionate leave caused waves in the Caribbean with Conde Riley, the Barbados Cricket Association president, calling for Simmons to be sacked for compromising the so-called “bubble”. Cricket West Indies, knowing it was fully cleared by the ECB’s medical team, defended its man.

Asked about this, Simmons replied: “Not much surprises me in life any more. But it has not had any impact on us as a squad preparing for the game. It was sad, going to a funeral. My father-in-law was very close to me. It’s just sad. That’s all I see.” - Guardian

England scrap sevens programme due to Covid-19 fallout 09:14
Manchester City now facing a rejuvenated Real Madrid 08:00
Bryson DeChambeau’s driver snaps on seventh tee at US PGA 07:28
McIlroy and Lowry in the mix at US PGA; Farrell knows Ireland will need to adapt 07:11
Sporting Cathedrals: Melbourne Cricket Ground a shrine that inspires reverence 07:00
Here is your handy guide to sport on television this week