‘I was molested by Larry Nassar’: How the gymnastics scandal unfolded

Dozens of victims have testifyied at the sentencing hearing of US sports doctor, Larry Nassar, who has pleaded guilty to additional counts of criminal sexual conduct related to allegations he assaulted girls under the guise of medical treatment. 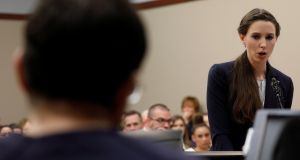 It began 16 months ago, before Harvey Weinstein and #MeToo and the tipping point of the US’s national reckoning with sexual assault, with an unsolicited email to the Indianapolis Star, which that morning had published a five-month investigation into the mishandling of sexual abuse allegations by the national governing body of gymnastics.

It read: “I recently read the article titled ‘Out of Balance’ published by the IndyStar. My experience may not be relevant to your investigation, but I am emailing to report an incident that may be.

“I was not molested by my coach, but I was molested by Dr Larry Nassar, the team doctor for USAG. I was 15 years old, and it was under the guise of medical treatment for my back.”

There was no way Rachael Denhollander could have known that that string of words would, in time, unravel the biggest sexual abuse scandal in sports history, one whose effects will resonate for years to come.

How easily they could have been swept aside - like so many other reports of Nassar’s molestation under the guise of medical treatment were dismissed, disbelieved or ignored by coaches, administrators, counsellors, police and university-employed trainers between 1997 and 2016.

Clicking send, as she later put it, was “a shot in the dark”.

Almost immediately after Wednesday’s sentence was handed down, the dominoes began to tumble.

But these words did not fall on deaf ears. And Denhollander, no longer a powerless adolescent gymnast but a 32-year-old attorney and mother-of-three, agreed to be named and tell her story on camera to the newspaper.

For six months, Denhollander stood alone as the only woman to publicly name Nassar, with co-accuser Jamie Dantzscher only disclosing her identity months later.

But over time, more and more victims were encouraged to break their silence (and in some cases non-disclosure agreements), emboldened in solidarity and sisterhood.

Among them were household names like Simone Biles, Gabby Douglas, McKayla Maroney, Aly Raisman and Jordyn Wieber and many others whom Nassar abused over two decades at Michigan State University, where he was a respected faculty member celebrated for his two-decade body of work with the United States’ world-beating women’s gymnastics team.

‘How much is a little girl worth?’

So it was somewhat fitting that Denhollander was the last of the 156 girls and women to deliver a victim impact statement during Nassar’s seven-day sentencing hearing.

She spoke with strength and composure on Wednesday morning in a Michigan courtroom, addressing not only Nassar himself but also the individuals and institutions whose collective failure allowed a sexual predator to systematically prey upon vulnerable young girls.

“I ask, how much is a little girl worth?” said Denhollander.

“How much priority should be placed on communicating that the fullest weight of the law will be used to protect another innocent child from the soul-shattering devastation that sexual assault brings? I submit to you that these children are worth everything. Worth every protection the law can offer. Worth the maximum sentence.”

She continued: “I was confident that because people at MSU [Michigan State University] and USAG had to be aware of what Larry was doing and had not stopped him, there could surely be no question about the legitimacy of his treatment. This must be medical treatment. The problem must be me ? I was wrong.”

Her 36-minute statement earned a standing ovation from the gallery with judge Rosemarie Aquilina singling out her principal role in bringing a serial child molester to justice.

“You built an army of survivors and you are its five-star general,” Aquilina said. “You started the tidal wave, you made all of this happen. You made all of these voices matter. You are the greatest person I have ever had in my courtroom.”

Even in his final days outside the prison walls where he will spend the rest of his life, Nassar demonstrated little understanding of the nature of his crimes. He penned a letter to the judge early in the sentencing hearing that accused the judge of grandstanding and claimed he feared for his mental health amid the parade of victim impact statements.

And on Wednesday, moments before taking his freedom, the judge used Nassar’s very words to seal his fate.

“So I’m trying to avoid a trial to save the stress to my community, my family ... yet look what’s happening. It’s wrong. I was a good doctor, because my treatments worked and those patients that are now speaking out were the same ones that praised and came back over and over. The media convinced them that it was wrong and bad.

That line drew an audible gasp in the courtroom, and when she had finished reading out loud Aquilina tossed the letter aside in disgust.

When Nassar refused to admit he was guilty in the final minutes before he was sentenced, stammering meekly “I’ve said my plea”, the judge handed down the maximum term of 40 to 175 years.

So far, culpability has centred on Nassar, but there are signs those who enabled or obscured his monstrous acts will be held accountable. Almost immediately after Wednesday’s sentence was handed down, the dominoes began to tumble.

Michigan State president Lou Anna Simon, supported by the board of trustees amid mounting pressure to resign from the student body and faculty, stepped down that evening.

On Friday, the school’s athletic director followed. Three top USA Gymnastics board members left the organization, followed by the remaining 18 after the US Olympic Committee threatened to decertify it as the sport’s national governing body.

Corporate sponsors like AT&T, Procter & Gamble, Hershey’s, Under Armour and Kellogg’s, once enamoured with the wholesome, family-friendly image put forth by Olympic champion gymnasts, have all severed ties.

Bela and Martha Karolyi, the former national team coordinators widely credited with transforming the United States from outsider to the head of the sport’s new world order, have been named alongside Nassar in some lawsuits in California with one complaint alleging they “turned a blind eye to Nassar’s sexual abuse of children”.

Last week, USA Gymnastics announced it had terminated its agreement with the Karolyi’s famed Texas ranch, which had served as the national team training centre since 2001 and where many of Nassar’s crimes were alleged to have taken places.

Few sports can match the individual physical and psychological rigours of gymnastics, which at the highest level can offer an awe-inspiring look at the outer limits of human potential.

But the power of one was never more evident than with Denhollander, the leader of an army whose courage in stepping into the breach will not soon be forgotten.