The Best Of Times: Taylor’s triumph a beautiful, unforgettable moment of perfection 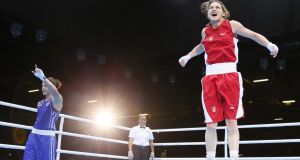 Ireland Katie Taylor jumps with joy as she celebrates her victory over Russia’s Sofya Ochigava of Russia in the women’s lightweight final at the 2012 London Olympics. Photograph: Jack Guez/AFP/Getty Images

It was as if it was written in scripture: just as promised, Katie Taylor has become the fiercest angel of the boxing world. Some time after 5pm yesterday afternoon, the Irish woman boxed her way to the Olympic gold medal that has occupied her dreams for over a decade and also into the hearts of tough ring men who thought they had seen it all. The history of boxing is like a battered suitcase crammed with mementoes and heartbreaking letters and shady misdeeds and into that great collection comes this beautiful, unforgettable moment of perfection.

“I wanted to shock the world,” Katie Taylor would say later, when she had that medal safely around her neck. And if she was invoking one of the most famous of all boxing phrases, evoking the words of Muhammad Ali when he knocked Sonny Liston out to become champion of the world over 40 years ago, then it was appropriate.

The Irish woman made her own history here. It wasn’t just that she has brought Ireland’s Olympic gold medals to nine or landed the country’s first boxing gold since Michael Carruth had his moment exactly 20 years before. More than that, Taylor’s luminosity – her technical brilliance and her sinewy grace and that controlled fierceness of hers – has given women’s boxing the champion and star it needed.

The sport that was blacklisted and banned for decades had in this, Katie Taylor’s most famous fight, the most wonderful and eloquent champion imaginable.

“From the minute I started boxing as a 10-year-old I dreamed of being an Olympic champion,” she explained as Irish fans went singing into the evening. “From then on, Dad pushed me at home. It was step by step. I remember boxing against Alanna [Audley, now Murphy], one of my best friends, in the first ever women’s fight in the National Stadium and that was a historic moment. It has been a long way from there to being Olympic champion. An unbelievable journey.”

And this was not the most comfortable fight of a career which has seen her emerge as a phenomenon in the fledgling, uncertain field of women’s boxing.

Her Russian opponent, Sofya Ochigava, matched her for speed and guile through the first and second rounds and it took a masterful two minutes from Taylor in the third period to secure the gold position. It was feral more than anything, with the fighters circling each other warily and then closing in for lightning fast exchanges before parting again.

Taylor and Ochigava held 10,000 people enthralled in the ExCeL Arena and all bar a handful were Irish. Fighting luminaries like Lennox Lewis and Amir Khan were in the hall. Kate Middleton and other royals looked on. Steve Redgrave, one of the most feted Olympians in history, sat riveted as Taylor moved with a panther’s lightness around the ring and stayed calm and purposeful as the madness grew heightened around her.

“We knew it would be such a tough fight. It always is – that is the fourth time I boxed her and every time was cat and mouse between us. It was always going to be that kind of fight so there was nothing surprising. It was going to be a game of patience. I knew I had to stay calm throughout the contest. I stayed calm and my dad was very calm in the corner. The tactics are always spot on in the corner. We have the best coaching team in the world and that is why we are winning medals.”

Anyone who was in the arena will never forget those nerve-wracking minutes when the bell sounded after the final round. Taylor had stumbled and half hit the canvas in the last second and the Russian, trailing by 7-5, began to attack the world champion with increasing abandon. The exchanges were tough and furious and after she had her gloves removed, Taylor cut a pensive figure. Ten thousand maniacs yelled her name while the judges reviewed their scores.

“My dad said if I did go a couple of points down just stay calm. I just had to stick to the game plan. It was great to pick up the two points but at the end I didn’t know what way the scoreline went. It was a great last round.”

Her father Peter had the feeling, though. Oddly, he felt more relaxed than ever going into this gold medal fight. “I tried to detract myself from being a father and just concentrated on being a coach. It was the most relaxed we were. It was Katie’s destiny to be an Olympic champion and I was never concerned,” he said.

So it went. The final score flashed up: 10-8. Taylor’s arm was raised by the referee. A nation yawped.

All the years of anonymous practice, of lonely fights in obscure places, of struggling for recognition in a sport that barely existed, all the prayers that they shared: it had all led to this deafening, heavenly boxing sanctuary on a swampy summer day in London.

“Because I trained so hard since I was 10 or 11 years of age,” was how Taylor accounted for this performance.

“And I serve an amazing God and without him I wouldn’t be sitting with this medal around my neck. I am there but for the grace of God. I serve him. I am nothing without him.”

The fight game, however, has a thousand stories of devout boxers who fell short in one way or another. It would have been heartbreaking to see Taylor denied in what will always be the defining fight of her life. Katie is 26 now and although people half expected she would bow out on this perfect note, she spoke afterwards of future fights, of maybe turning professional. All she knows is that she is not ready to leave women’s boxing behind now that she has played such a marvellous role in making the world turn its head.

But what can ever eclipse this moment for sheer joy and wonder? When Taylor took the Irish flag and broke free of the clutches of the Olympic stewards to honour the delirious and partisan crowd with a lap of honour, that seemed to be her grace note. The lights above illuminated the flag and Katie Taylor was as she has been for too much of her sporting life: an elusive, brilliant thing. That gorgeous moment of indulgence, when she was reluctant to leave the arena, when she allowed herself to be adored for a few seconds, was a feeling she will carry with her through her life.

On the medal podium, she laughed and joked with Ochigava – “She said she was going out for drinks later and asked me to come along” – and then the other medallists departed and left the Irish woman in the ring, all alone.

That was the moment. Tough men shed tears. Royals stood and applauded.

Ireland’s tawdry troubles ceased to exist for a little while. The best of whatever stuff is in the country seemed to be bottled up inside this pretty girl from Bray.

“Nothing’s going to change for me when I go home, will it?” she asked innocently at one stage.

But life has changed. It is anybody’s guess as to what Katie does next.

For now, it is enough that she had the grace and composure to do what she had always promised herself she would do. She walked into the London evening wearing gold.