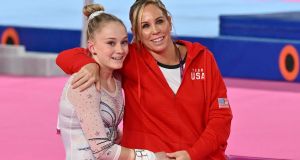 Maggie Haney (r) with Riley McCusker after her routine in the Artistic Gymnastics Women’s Uneven Bars Final to win the gold medal during the Lima 2019 Pan-American Games. Photo: Luis Robayo/AFP via Getty Images

Some female gymnasts testified that Maggie Haney ordered them to remove temporary medical casts from their injured legs and to train through the pain. Girls as young as 10 did as they were told for fear of arousing their coach’s anger and being sent from the gym. Others allege the 42-year-old dragged them by the hair when they fell during a routine, often called them “retarded”, and threatened to throw one against a concrete wall if she failed to correctly execute a move a second time.

“Do you have Tourettes?” she asked a girl who shook with fear as she prepared to mount the uneven bars under Haney’s critical gaze.

At her vaunted MG Elite gym in New Jersey, bodyshaming was commonplace. Teenagers perceived to have put on weight between sessions were denounced as fat and told to shed the pounds quickly or else college recruiters would be told they weren’t up to the task of competing at that level. Pubescent girls were warned that menstruation was a sign they were obviously overweight. When one youngster got her first period while in the bathroom at the gym, her biggest concern was that Haney might somehow find out and be angry.

Parents were not allowed in the building during training sessions. Under any circumstances. That much was underlined in the handbook given to them when they signed their talented kids up to work with a woman regarded as one of the best technical coaches in the world. However, the sheer volume of the shouting by Haney and her equally vociferous assistant Victoria Levine was often such that the cacophony could be clearly heard by those sitting in the car park outside.

Over time, a couple of kids confided in mothers and fathers about the extent of the reign of terror under which they trained. If a phone call was subsequently made to Haney voicing concern, she denied every charge, putting it down to girls being over-dramatic and not understanding what was needed to make it to the top. Then, at the very next session, she would read out the complaint to the group and punish them all with extra conditioning work. One protegé claimed she used to hope the car bringing her to the gym might crash en route, another spoke of living in dread of being dropped off there.

“My coaching techniques were at all times, well-intended; meant specifically to lead to…achieving Olympic gold,” said Haney last month following USA Gymnastics’ decision to suspend her for eight years from the sport. “If the pursuit of excellence and the rigour of my coaching style has resulted in any harm to any gymnast that has been a part of my team, I am truly sorry.”

As might be expected from the governing body which disgraced itself dealing with Larry Nassar, the national team doctor who molested hundreds of girls, the timeline of this case is troubling. Shortly after winning team gold at the Rio Olympics in 2016, Laurie Hernandez told Rhonda Faehn, USA Gymnastics senior vice-president for the women’s programme, about suffering long-term emotional and verbal abuse by Haney. Hernandez vowed never to work with her again and asked the leaders of the sport to make sure her former coach never even contacted her.

One of the biggest names in gymnastics made an accusation of that gravity yet nothing was done. For three full years. A formal investigation into Haney wasn’t opened until last summer after Riley McCusker, the latest world champion out of MG Elite, complained of similar abuse and suggested the powers that be interview girls who had left the gym. Their testimony brought home the extent of the damage.

“Gymnasts continue to have nightmares about the abuse and suffer panic attacks, depression, have suicidal thoughts and battle body image issues and eating disorders, according to interviews and documents,” wrote Scott M. Reid in a superb investigative piece for the Orange County Register. “For some of the gymnasts, anxiety and depression have led to self-harming behavior like cutting. One former MG Elite gymnast pulls out her eyelashes and eyebrows, according to her mother.”

Perhaps even more inexplicable than Haney not getting a life ban is the behavior of some parents in this. Hundreds of children attended the gym. Just six families testified. Worse still, a couple confessed that when they heard about the coach making injured girls take off temporary casts, they simply asked doctors to put on permanent casts instead. As if that addressed the issue. In far too many stories about long-term abuse in sport, obsessive parents are so blinded by the possibility of their child achieving glory that retaining access to the superstar coach becomes more important than the welfare of the kid.

In 1995, Joan Ryan exposed the sordid world of gymnastics with her book, Little Girls in Pretty Boxes. A searing, forensic indictment of the entire sport, she exposed Bela Karolyi, the gold standard since his days with Nadia Comaneci at the Montreal Olympics, as an especially horrendous piece of work. Young girls in his care lived under a brutal regime, were routinely underfed, banned from ordering room service and constantly persecuted about body shape and weight. Haney, and the others like her no doubt still out there, are all merely working from his punitive template.

Same old, depressing story. Only the names change. Too many coaches and parents never do.