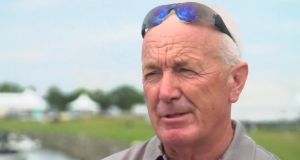 Dominic Casey has been named World Rowing Coach of the Year.

Dominic Casey has been chosen as the Coach of the Year at the World Rowing Awards. At a gala event in Berlin, the Ireland lightweight coach was presented with his award by Fisa vice-president Tricia Smith.

Questioned by the host for the awards, Peter O’Hanlon, Casey agreed it was a fantastic time for Irish rowing. Asked for the advice he would give young rowers, the self-effacing Casey was characteristically succint: “Have fun. Keep it simple.”

Dominic Casey has been a force in Skibbereen and Irish rowing for decades. He led crews to a host of international medals and this is his third consecutive year to be nominated for World Rowing Coach of the Year.

Fittingly, Casey oversaw the first Olympic medal in rowing for Ireland, won by the lightweight double of Gary and Paul O’Donovan in Rio de Janeiro in 2016. This year, Casey guided this crew to a gold medal at the World Rowing Championships. The O’Donovan brothers had also taken gold at the World Cup Regatta in Lucerne and silver at the European Championships.

The O’Donovans were nominated as male crew of the year, but the award went to the outstanding Australian four who have been on a remarkable two-year unbeaten run. Sanita Puspure, the new world champion in the women’s single sculls, was one of three nominees for female crew of the year. The Poland quadruple which won gold at the European and World Championships, took this prize.

The awards were spread widely through the world. The mixed double scull from the Netherlands won the para-rowing crew of the year and the Sustainability Award went to “Love Where You Row”, run by Alan Robinson and Schuylkill Navy in Philadelphia in the United States.

The winner of the 2018 World Rowing Distinguished Service to International Rowing is Borge Kaas Andersen of Denmark, while the Filippi Spirit award for university students was won by Amidu Silva of Sri Lanka.