Composed Kellie Harrington steps up to the highest mantle 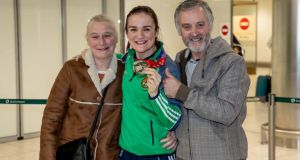 World champion Kellie Harrington shows off her gold medal alongside her parents Yvonne and Christy on her return to Dublin airport on Sunday. Photograph: Morgan Treacy/Inpho

Two years ago the story coming out of Astana was how Katie Taylor had failed to win her sixth successive World Championship gold medal.

To that backdrop the silver medal won by light welterweight Kellie Harrington was not so much overlooked but under-valued as part of the news cycle coming from Kazakhstan.

Even though the tournament ended with Harrington winning a silver medal and Taylor bronze, the fact that Taylor was beaten carried more import than Ireland’s new emerging talent. The country couldn’t see much beyond the Bray lightweight and the Rio Olympics. Harrington’s weight division wasn’t even an Olympic category.

There is some circularity about Harrington now taking the title Taylor once dominated. Beating Thailand’s Sudaporn Seesondee on a 3-2 split decision to top the lightweight podium in New Delhi, India, she deservedly steps into where the woman who set standards in world boxing left off.

It has taken two years and the decision to drop to 60kg for Harrington to finally create her own aura as an outstanding talent, and after Taylor and Michael Conlan becomes just the third Irish boxer to win a World Championship gold medal.

Harrington did it beating quality along the way with wins over Troy Garton, home favourite Sarita Devi, Canadian Caroline Veyre, and a talented young Kazakh Karina Ibragimova, before the tightest fifth bout against southpaw Sudaporn Seesondee that divided the judges. Three of the five officials went with the Irish fighter, two with the Thai for a 3-2 split decision.

“I’m still kind of numb right now to be honest,” said Harrington after celebrating victory with her coaches Zaur Antia and Dmitry Dimitru at the Indira Gandhi Sport Complex.

“Sometimes when people say they don’t believe it. I said it and I believed it. I worked in silence, came back and did the job.”

You would suspect there will be little silence on Seán McDermott Street at 6pm today when Harrington, who arrived back in Ireland on Sunday, will receive a civic reception hosted by the Lord Mayor of Dublin, Nial Ring.

On Saturday, Harrington once again showed her discipline and composure under pressure, switching her lead hand and staying away from the heavy left that Seesondee was itching to land throughout.

Harrington smartly stayed away from the most damaging of Seesondee’s shots and landed enough of her own in scoring raids as she kept at jabbing distance.

There was good intelligence from Antia as veteran Seesondee was a bronze medal winner at light welterweight in the 2014 World Championships.

An absorbing bout, it was never clearcut. Seesondee had eliminated Mira Potkonen earlier in the week, the fighter who won a bronze medal when she defeated Taylor at the 2016 Rio Olympics.

In the end it came down as much to the Irish boxer’s superb defence and avoidance, often swaying out of the way of Seesondee’s combinations and countering with her own scoring in flurries.

Harrington kept moving throughout, and kept her left jab busy. She was the go-forward boxer in the first round and third rounds, although Seesondee stepped up the tempo in the second. Even then it was difficult to separate the two as Harrington switched to southpaw and back to keep her opponent thinking.

Harrington was moving freely and Seesondee, more set in her stance, may have been the stronger boxer. But the Irish lightweight didn’t allow herself become locked into a punching duel.

Both boxers were landing, and in the end Seesondee went looking to land long left backhands with Harrington scoring inside. It was the 28-year-old who got through more often, Seesondee too often wide of the mark.

Almost disbelieving that she had turned the fight, a tearful Harrington left the ring knowing she is setting the world standard for Tokyo qualification and a podium place in 2020.