America at Large: The screenwriter missed his own Oscar win to watch the New York Knicks 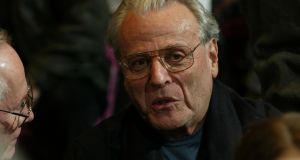 In 1970, William Goldman’s nomination for the best original screenplay Oscar for Butch Cassidy and the Sundance Kid presented him with a bit of a conundrum. The ceremony was in Los Angeles on a Sunday evening, his beloved New York Knicks were playing the Baltimore Bullets in Game 7 of an NBA playoff the night before. A tough choice between the biggest awards night of his professional career or seeing his favourite team try to keep their title charge alive at Madison Square Garden?

He watched the Knicks punch their ticket to the Eastern Division finals, and, at the Dorothy Chandler Pavillion in Hollywood 24 hours later, a slightly embarrassed Katherine Ross (who played Etta Place in the movie) dashed onstage to accept his trophy with a perfunctory, “Thank you from Bill Goldman. ”

“When you get excited about sports, as I do, you develop expectations and images in your mind of how well a game can be played,” said Goldman. “And you root for it to be played that way. When it’s not, it’s disappointing. When it is, it’s thrilling. Like life.”

He admitted vetting potential film collaborators by whether or not they had a similar passion for a team.

At Madison Square Garden nine days ago, one of the courtside seats lay empty for the Knicks versus the Portland Trailblazers. A T-shirt that read “New York Forever” and a bunch of flowers had been placed where Goldman, who died at the age of 87 on November 16th, used to sit. Casual fans constantly eyeballing the actors, starlets and rappers du jour who ordinarily people celebrity row for NBA games probably never realized the patrician season ticket-holder of that prime spot under the basket had a more enduring impact on popular culture than just about every star in that galaxy.

Prolific and versatile, aside from Sundance, he wrote the screenplays for, among others, Misery, A Bridge Too Far, The Stepford Wives, The Marathon Man, and, of course, All the President’s Men. His treatment of Bob Woodward and Carl Bernstein’s book yielded his second Oscar, and, despite Robert Redford’s scurrilous campaign to undermine his authorship over the years, it is Goldman’s original line “follow the money” that has entered the popular lexicon from that movie. Like a slew of other phrases (“My name is Amigo Montoya . . . As you wish! . . . Inconceivable!”) from The Princess Bride, the timeless classic that Rob Reiner made of his book of the same name.

He wrote more than 20 novels and had some memorable non-fiction outings too. His memoir Adventures in the Screen Trade is regarded as the definitive insider’s take on the movie business, not least for the oft-quoted line summing up Hollywood as a place where “Nobody knows anything”. Equally, The Season, his account of a year in the life of New York theatre is regarded as an essential work about Broadway. Whatever the subject he turned his hand to, sport remained the prism through which he viewed the world, and he admitted vetting potential film collaborators by whether or not they had a similar passion for a team.

“It’s the same in sports as it is in Hollywood,” said Goldman. “All you need to drive up the price is more than one person who wants the same thing. A ballplayer. A script. It doesn’t matter.”

In 1978, he took a flat in London so he could go to Wimbledon with his friend Dave De Busschere, a member of the fabled Knicks team that caused him to miss the Oscars. There, the pair ran into Mike Lupica, a New York tabloid sports columnist.

“You have the best job in the world,” said Goldman.

The lifelong friendship formed that day spawned Wait Til Next Year, an under-rated book in which the writer and the reporter, a pair of inveterate New York sports fans, offer alternating takes on the events of a typically bonkers 12 months in the life of the city’s various teams. In it, Goldman writes most lyrically about the way the greatness of retired players is diminished by fickle fans with short attention spans, citing how Wilt Chamberlain’s magnificence had been quickly forgotten by a 1980s generation then consumed with the wondrous feats of Magic Johnson and Larry Bird.

“The greatest struggle an athlete undergoes is the battle for our memories,” he wrote. “It’s gradual. It begins before you’re aware that it’s begun, and it ends with a terrible fall from grace. It really is a battle to the death.”

An avid student of popular culture, Goldman’s only proviso about the 1987 movie adaptation of The Princess Bride is that the seven foot four French wrestler Andre the Giant had to play the behemoth Fezzik. He knew it was a great piece of casting when, upon visiting the set, he discovered small children used to playfully sit on genial Andre’s head and hands in between takes.

In the opening scene of that work, a grandfather (played by Peter Falk in the film) wants to read the story to a disinterested grandson who is sick in bed.

“Does it have any sports in it?” asks the kid.

A note-perfect synopsis of the book or, equally, of Goldman’s five decades supporting the Knicks.

1 Gerry Thornley: Wild reactions to this Ireland team as fickle as the wind
2 Cian Healy out of remainder of Six Nations
3 Dan Tuohy explains ‘rotten to the core’ comments
4 Five Golf Classics for you to tee up at in 2020
5 Cheltenham keeping a watching brief on coronavirus
Real news has value SUBSCRIBE