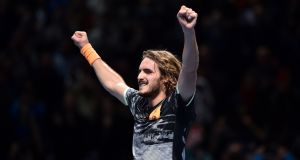 Stefanos Tsitsipas came of age at London’s 02 Arena with a stunning victory over Dominic Thiem to win the ATP Finals.

The 21-year-old from Athens became the youngest winner of the prestigious season-ending tournament since Lleyton Hewitt in 2001, and the youngest debutant to lift the trophy since John McEnroe back in 1978.

Just a year after winning the NextGen Finals, for players of 21 and under, Tsitsipas mixed it with the very best on the bank of the Thames and came out on top.

Congratulated by his country’s prime minister Kyriakos Mitsotakis after his semi-final win over Roger Federer, Tsitsipas went on to write his name in Greek sporting mythology with a 6-7 (6), 6-2, 7-6 (4) victory.

It was only the third time in 16 years that the final did not feature at least one of the ‘big three’, Rafael Nadal, Novak Djokovic or Federer, and further evidence surely that the long-awaited power shift in men’s tennis is finally on the way.

At 26 Thiem is just about part of that youthful scene as well, and his notable wins over Federer and Djokovic this week helped him climb to fourth in the world rankings.

But the final belonged to Tsitsipas and the legions of Greek fans who made the 02 feel like a home from home for the new champion.

The two are close friends on the Tour – Tsitsipas even acted as Thiem’s hitting partner at the tournament in 2016 – and they embraced at the net after a gruelling encounter.

Tsitsipas said: “I was playing with nerves, it’s such a big event. I was a break up in the third set, but couldn’t hold it, but I’m so relieved with this outstanding performance I gave on the court.

“It’s phenomenal, unbelievable to have such an army behind me, they give me energy, and belief, and I just love that. I would like to thank everyone who supported me with a Greek flags and made me feel at home.”

Tsisipas was the aggressor from the start, dropping just three points in his opening three service games while forcing the first break point, from which Thiem escaped with a swish of his forehand.

There were further chances to break for both players, Tsitsipas serving and volleying his way out of trouble and Thiem finding his first serve when he needed it.

A tie-break was required to separate them, and when the score reached 7-6 each player had won 44 points. But crucially, Thiem had the ball in his hand and an unreturnable first serve clinched the opening set.

Yet if that was tight, the second was a walkover as Tsitsipas broke twice, raced into a 4-0 lead and confidently served it out. The first set had taken over an hour, the second lasted 26 minutes in a blur of shaggy hair and flamboyant shot-making, and all Thiem’s good work had unravelled.

When Thiem netted a backhand Tsitsipas had an early break in the decider, but the Greek began bearing gifts and three wayward backhands allowed Thiem to draw level.

The powerful one-handed backhands were out in force from both players in the tie-break, but it was a horrible, wafted forehand from Thiem which handed Tsitsipas the initiative, and a memorable victory was wrapped up in two hours and 34 minutes.