Fiery Nadal battles for every point to overcome Tsitsipas 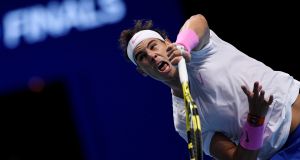 Spain’s Rafael Nadal against Greece’s Stefanos Tsitsipas in the ATP Finals at the O2 Arena in London. Photograph: Reuters/Tony O’Brien

This was a fight Rafael Nadal did not desperately need – he already secured the world No 1 ranking when Novak Djokovic fell to Roger Federer on Thursday evening – but one he fought with heart and guile to win 6-7 (4), 6-4, 7-5 over two hours and 52 minutes of an often spellbinding struggle against Stefanos Tsitsipas.

Nadal, who sprinted from the court at the ATP Finals in London to brush his thinning hair and change his shirt immediately after winning, returned to accept his No 1 ranking trophy (the fifth of his career) and said: “I’m super-happy. After all I went through, the injuries, I never thought at 33 and a half I’d have my hands on this trophy again. A lot of work in the shadows to be where we are today.”

In the penultimate match of the round-robin series, the first set moved with grinding inevitability to a tie-break, where the young Greek unleashed his full power to go a set up in just under an hour.

The quality of the exchanges flickered, bordering on the breathtaking, flirting with mediocrity, as each player strained for dominance. Nadal soaked up five aces – but not the one down the T that sealed the set. He must have taken heart, though, from matching Tsitsipas for winners, four each on both wings, and there was little between them in unintentional mistakes. Yet youth looked to be conquering legend. Nadal was slightly off in key moments, and his opponent pounced each time.

Tsitsipas seemed heading for a straightforward result as he cranked up his serve in the second set, but Nadal was having none of it, fighting hard for every point to stay on terms eight games and 38 minutes in.

The crowd leaned forward for each rally, wondering if the young Greek would implode against Nadal the way Medvedev had done when in sight of victory two nights earlier. The manner of his blip was less dramatic, but delivered the same result.

Tsitsipas’s serve was on fire: down the middle, out wide. He was a nightmare with ball in hand. However, when Nadal smashed athletically for break point in the ninth game, punching the air as only he can, then finished the job by forcing his opponent to push a nervous forehand wide into the tramlines, it was the Spaniard who was properly, “en fuego”.

They had been on court for an hour and three-quarters but there was still plenty of spring in Nadal’s step as he served out to level at a set apiece.

And so the punches kept rolling in the third, one fusillade after another. Both were wired to the maximum. Nadal crafted two break points in the fifth game, eyes blazing, only to see Tsitsipas, a little calmer, steel himself for a quality hold with his booming serve and a solid forehand.

It was the Greek’s backhand that Nadal kept jabbing with those draining, top-spun lefty forehands, deep and wide. Mostly it held up, and Nadal had to pepper it consistently to hold for three-all as the set went past the half hour.

Nadal, tired but playing near his awesome peak, stepped up to the service line at 4-5 in the third and produced a rock-solid hold. At 30-all, Tsitsipas was stranded when Nadal planted a blistering forehand on the line for his eighth break point of the match. He saved but gave up another – and this time he could not handle a volley at his feet, and Nadal served for the match, with new balls.

As it happens he could have done it with a rolled-up sock, forcing a final tired forehand from Tsitsipas, marooned behind the line.

The byword of this tournament – the 50th in the history of the event and the 11th here before the move to Turin in 2021 and – has been unpredictability. While expectations were not as nailed on as in some previous years, not many would have predicted Tsitsipas to beat Medvedev for the first time in the first round, or Zverev, similarly, to get the better of Nadal; then Thiem played out of his skin to beat Federer and Djokovic. The Serb looked brilliant in defeat – then abject in two sets against Federer, whose loss to Thiem was poor by his standards. Topping all that, Nadal produced magic from his locker to recover from match point and 1-5 down to beat a demoralised Medvedev.