In 2013, men’s hockey team went on to win silver medal despite gear disappearance 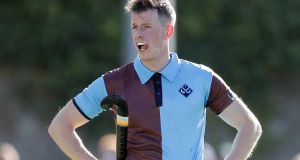 Three Rock Rovers will be feeling the ghosts of tournaments past as they size up opposition in Turkey at this weekend’s EuroHockey Indoor Club Trophy. The last time the Dublin club travelled to Turkey in 2013, they hammered down their tent pegs about 400km from the Syrian border in Malatya.

The adventure didn’t stop there as all of their gear was lost en route. Their Turkish hosts, however, were kind enough to supply what they could to their Irish visitors, including goalkeeping pads held together with gaffer tape, and a pile of second-hand sticks, some of them mini sticks for children.

The late arrival of their equipment did not deter the Irish champions as they went on to win the silver medal, with Stephen West voted best tournament goalkeeper and Jody Hosking the tournament’s best player.

This time Rovers face English side East Grinstead and Croatia’s Zelina on Friday in Alanya, before facing the Dutch team SCHC on Saturday. There is also a little bit of history attached to their meeting with the Dutch side as Rovers and SCHC were at one time twinned as it is the old club of Jantien Findlater, the mother of Three Rock Rovers player Stephen.

It has been an exciting season for Irish indoor hockey with the re-establishment of the men’s and women’s senior national teams after a 30-plus year hiatus. The men’s squad travelled to Santander in Spain in mid-January for the Euro Indoor Championships III with Three Rock Rovers players Ross Canning, Mark English and Harry Morris all playing with the Irish side.

Outdoors, the EY Irish Hockey League continues with Pembroke facing leaders Lisnagarvey in Serpentine Avenue on Saturday. Pembroke hope to bounce back from their 5-2 defeat by Rovers in last week’s rescheduled matches.

It is a tough ask for the Dublin club, as Lisnagarvey are facing their 10th league game and are as yet unbeaten with eight wins and a draw so far. Monkstown, who are five points behind the Ulster team, face Banbridge away on Sunday.