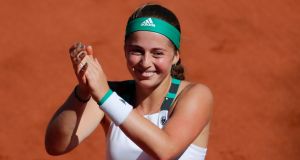 Jelena Ostapenko of Latvia celebrates her victory over Simona Halep of Romania at the French Open at Roland Garros. Photograph: Thomas Samson/AFP/Getty Images

Latvia’s Jelena Ostapenko overpowered title favourite Simona Halep to become one of the most surprising Grand Slam champions of all time.

The 20-year-old, ranked 47, had never been beyond the third round at a Grand Slam before nor won a senior title.

But she was unfazed, hitting 54 winners in a 4-6 6-4 6-3 victory to become the first Latvian ever to win a Grand Slam singles crown.

Ostapenko is the first unseeded player to win the women’s singles title at Roland Garros in the Open era.

When she drilled a final backhand winner down the line, Ostapenko dropped her racket to the clay and held her arms aloft in delight and disbelief.

She said: “I think I cannot believe I’m the Roland Garros champion. I’m only 20-years-old. I’m really happy. I have no words, it was my dream.”

Ostapenko had blasted her way into the final on the back of 245 winners – more than any other player in the draw, man or woman.

But Ostapenko had made nearly as many errors and the challenge for her was to keep the ratio in her favour.

This was the classic contrast of styles, with Halep a superb mover and defender, but ultimately aggression won out.

What was most remarkable was how Ostapenko defied her lack of experience to fight back from a seemingly hopeless position.

Halep, beaten by Maria Sharapova in the final here in 2014, had been the favourite from the start pf the tournament and looked to be cruising at a set and 3-0, with points for 4-0.

But Ostapenko trusted in her game and then came from behind again in the decider, winning the final five games.

She said: “I knew Simona is a great player and she was playing great. I was just trying to stay aggressive.

“I was missing but a couple of games were decisive and everything turned my way. Even in the third I was 3-1 down but I tried to fight for every point.”

But the other side of her game came out when she gave the game straight back, and it was a similar story when Ostapenko broke again to lead 3-2.

The key game of the set came on the Halep serve at 4-4.

Ostapenko pushed for the break but Halep is a better defender than any of the Latvian’s previous opponents and she withstood the pressure.

Ostapenko was then unable to hold her serve, finishing the set with a tally of 14 winners and 23 unforced errors.

In the absence of Serena Williams and Sharapova, Halep clearly felt her name was on this trophy.

She refused to accept she might not even make it to Paris after suffering an ankle injury a week before the tournament and then fought back from a set and 5-1 down against Elina Svitolina in the quarter-finals.

The Romanian looked to be cruising towards the title at 3-0 in the second set but betrayed her emotions by throwing her racket to the clay when Ostapenko stopped the rot after a long game.

And suddenly the balance started to shift the way of power over patience.

Ostapenko turned the set around with four games in a row and then levelled the match with a forehand down the line – the shot that was doing the most damage.

This was now a real test of Halep’s new-found positive attitude, with the Romanian having been briefly dumped earlier this season by coach Darren Cahill because he did not like her mindset.

She dug in at the start of the decider, fighting back from 15-40 to hold serve, and took advantage of more Ostapenko errors to lead 3-1.

But, as in the second set, Halep was allowing – or perhaps helpless to prevent - the match being played on Ostapenko’s racket.

Back came the Latvian, who enjoyed a huge stroke of fortune when a backhand clipped the top of the net and bounced down on Halep’s side to give her a break for 4-3.

By now the momentum was unstoppably with Ostapenko and she took her first match point after an hour and 59 minutes.