Finally, there may be a team that can outlast LeBron James 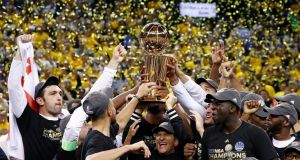 As the final seconds began to tick off the clock in game five of the NBA Finals on Monday night, LeBron James stood under the basket and looked up, oblivious to the action going on behind him.

Then, as the finality began to sink in that there would be a new champion, he pivoted and walked purposefully toward the other end of the court, making a beeline for Kevin Durant, a rare equal whom he had spent much of these finals battling.

In that moment when they embraced, James might have seen something of himself in Durant, another transcendent talent who had to endure years of frustration, and a change of scenery, before earning the validation that comes with a title.

A while later, James acknowledged seeing something else, a player in Durant and a team in the Golden State Warriors, who not only buzz-sawed through his Cleveland Cavaliers in five games, clinching their title with a 129-120 victory, but who may not be abdicating any time soon.

“Pretty much all their big-name guys are in their 20s, and they don’t show any signs of slowing down,” James said. “So there’s going to be a lot of teams that are trying to figure out ways to put personnel together to try and match that if they’re able to actually face them in a playoff series, both Eastern Conference and Western Conference. Because they’re built for - from my eyes - they’re built to last a few years. So we’ll see.”

James has taken his teams, in Miami and now Cleveland, to seven consecutive finals. Finally, there may be a team that can outlast him. Durant, the finals’ most valuable player, is 28. Stephen Curry is 29. Klay Thompson and Draymond Green are 27. Only Andre Iguodala, 33, might be considered on the backside of his prime, though he hardly showed it Monday, with 20 points that included a thunderous dunk.

The 32-year-old James, with the mileage of 14 seasons on his legs, never slowed down in this series. He became the first player to average a triple-double in the finals, and his 41 points, 13 rebounds and eight assists on Monday were enough to leave him somewhat at peace with the final result.

This was not the James of two years ago, when he was still at his locker, a towel draped over his head, 45 minutes after the Warriors beat his injury-diminished Cavaliers in six games in the first of their three consecutive confrontations in the finals.

Instead, this time, James could look dispassionately at what happened. He even tried to put it in terms a sports writer could understand. “It would be the same if you wrote the best column of your life and somebody picked another one over you,” James said.

“How would you feel? So you wouldn’t hold your head down, but you would be like, ‘OK, it’s just not my time.’” A year ago, James’ chase-down and block of Iguodala’s late layup attempt proved to be the signature play in Cleveland’s stunning game seven win over the Warriors, a victory that capped a comeback from a three-games-to-one deficit.

But the two indelible moments in these finals were not as favorable to James. In one instance, in game one, he was put through the rinse cycle, futilely chasing Curry and whiffing on a block attempt. Then, in game three, James stood helplessly as Durant buried a late 3-pointer that essentially gave the Warriors the victory.

James has now won only three of his eight trips to the finals, a losing record that doesn’t align with everything else he has achieved but does point to just how hard it can be to lead a team to a championship.

James has dealt unflinchingly with those expectations season after season. But winning the finals has often proved to be elusive. “You need a few good bounces, you need good luck, you need to be healthy and you need to have players that can focus every night, not four or five games,” West said. “And then there has to be that incredible will. Sometimes that will wins out.”

For James, it did a year ago. And Monday night, he tried to push the Cavaliers to come from behind and keep the series going. But Kyrie Irving missed all six of his shots in the fourth quarter after his back and knee stiffened. And the Cavaliers’ defense stumbled, leaving the Warriors with several painfully easy shots.

With just under two minutes to play and the Warriors nursing a 126-115 lead, James backed Durant into the lane, pivoted and shot a 14-foot turnaround that rimmed out. Tristan Thompson grabbed the rebound, but he missed, too. The game, and the series, was over.

In many ways, it was the intended outcome of the Warriors’ coup last summer, when, still feeling the sting of losing to James in the finals, they lured Durant away from Oklahoma City.

“That’s what you have to do when you’re going against LeBron,” said Cavaliers forward James Jones, who has been with James since he went to Miami and won his first two titles. “You have to try to stack the deck. I think last year proved that you can never have too many weapons when you’re trying to compete with him. That’s the mark of an amazing player - he’ll constantly force people to look to try to stack the deck.”

Now, the Warriors have in Durant the next best thing to James - as well as a full cast of game-changers and role players who have figured out how to play seamlessly together. If some chastised Durant for leaving Oklahoma City to take an easier route to a title, James was not among them. And late Monday night, he again lauded the Warriors for landing the player who turned out to be the MVP of the finals.

As the summer begins, James said he would be back in the gym; “It’s just a lifestyle for me,” he said - and begin to consider his future and how the imposing Warriors fit into it. While he reminded everyone that he is not a general manager, he said an upgrading of the Cavaliers’ roster may be in order.

"I need to sit down and figure this out,” James said, as if the ball were squarely in his court.