Bora-hansgrohe continues impressive form with Vuelta a Espana up next 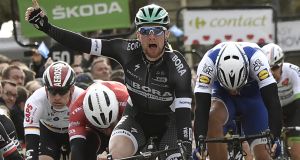 Having gone close to victory four times during the Giro d’Italia, netting stage placings of second, third, third and third there, Sam Bennett returned to the top step of the podium on Thursday in the Tour of Slovenia.

The Carrick-on-Suir rider was guided into position by his team-mates at the end of stage one of the race, missing a dangerous crash close to the line, and then blasted home first. He beat Sonny Colbrelli (Bahrain-Merida), Luca Mezgec (Orica-Scott) and the rest of the bunch to the line.

“We controlled the race the whole day with Alex [Aleksejs Saramotins] pulling together with the other sprinter teams,” said Bennett afterwards, referring to his teammate . “Because the day was easy in the bunch, the final on the last two laps was especially fast.

“We lost each other a little with four kilometres to go, but Rafa [Rafal Majka] brought us back up. When we hit the front in the last kilometre, Pösti and Rudi delivered me so fast, I just had to hold the speed to the line. It was a great win after a strong team work. I still feel a little tired after the Giro, but the speed is also still in my legs.”

The win is Bennett’s third of the season. In January he was best in the Race Melbourne event, then in March he took the biggest victory of his career thus far when he won stage three of Paris-Nice. His Giro d’Italia performances show that he is capable of a Grand Tour stage win, even if he didn’t top the podium there.

Team-mate and world champion Peter Sagan is the Bora-hansgrohe team’s protected rider for the Tour de France. This plus Bennett’s Giro participation means that he will miss the race, but it is quite possible that he will ride the Vuelta a España instead. If so, riding two three-week races in one season should help in his ongoing development as a pro rider, as well as giving him further opportunities to take his maiden Grand Tour stage win.

Bennett will wear the race leader’s jersey on Friday’s second stage of the Tour of Slovenia.

Meanwhile Dan Martin’s buildup to the Tour is going well, as evidenced by his second place on the final stage of the Critérium du Dauphiné on Sunday plus his third place overall. He finished ahead of Tour favourites Chris Froome (Team Sky) and Alberto Contador (Trek-Segafredo) on both that stage and in the overall standings.

His first cousin Nicolas Roche was also in the race, although he was riding for his BMC Racing team-mate Richie Porte. The Australian took second overall. Roche is expected to be lining out in the Tour de France, with his team role requiring him to try to help Porte win overall.